Germany: Calls grow for harder lockdown ahead of Christmas holidays 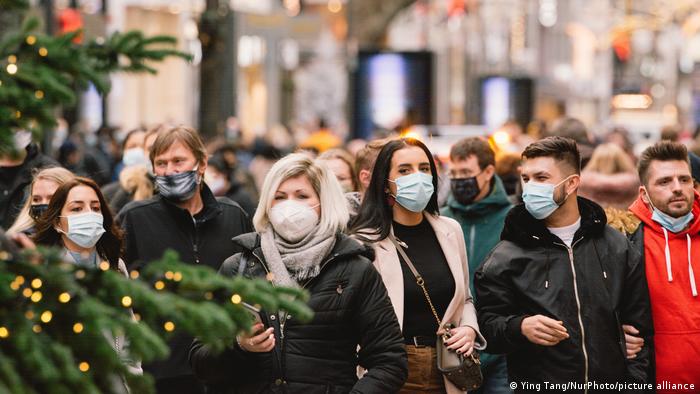 With German coronavirus caseloads plateauing, but not sinking, calls for tougher restrictions are mounting

Germany may need to introduce more restrictions to curb the spread of the coronavirus, Health Minister Jens Spahn said on Tuesday.

The country has been under a partial lockdown and imposed social distancing rules since November 2, which stopped a trend of growth nationwide. But the measures have caused caseloads to plateau, rather than to sink notably so far.

"If we don't get there within the next one or two weeks until Christmas, we have to discuss it," Spahn said.

"We will not get anywhere on the principle of hope," Merkel reportedly told party colleagues. CDU politicians said that she also complained of "too much talk about mulled wine stands... and too little talk about nurses and carers."

Germany's influential National Academy of Sciences, Leopoldina, sounded the alarm on Tuesday, saying that a "hard lockdown" between December 24 and January 10 was necessary to reduce caseloads in the country.

Leopoldina also suggested that schools should close early, on December 14, either moving to online classes or to early Christmas holidays, and "public life should broadly come to a halt in all of Germany" for at least two weeks after Christmas.

'Enormous risks,' but also an 'enormous chance' over the festive period

Professor Ralph Hertwig, one of the co-authors of the Leopoldina statement and a psychologist at the Max Planck Institute in Berlin, told DW that the Christmas period represented a unique opportunity to bring the infection rate back under control in Germany.

"If such a circuit breaker or a hard lockdown is necessary, then let's do it through a time in which we — through our culture anyhow — are staying at home."

He told DW that other countries had successfully implemented a hard, circuit-breaker lockdown.

"If we compare the situation in Germany to other countries, such as the Belgium or Ireland, they went through such a quick, brief and very hard lockdown. And their numbers are much, much better than the ones in Germany."

He said the initial phase of self-isolation was necessary to avoid infections among Christmas events.

"On the 24th, you may meet the family members who you haven't seen in quite some time. And of course, at that point, you want to make sure that you are not spreading the virus or that you don't have active symptoms."

Does Germany need a lockdown heavy?

New restrictions nationwide would require the agreement of both Merkel's government and those of all the heads of Germany's 16 federal states. But some states are already taking action on their own.

The head of Berlin's city-state government, Michael Mueller, emphasized the need for a national strategy, in an interview with German broadcaster ARD, while predicting that common ground would be found.

"I can well imagine that there will be restrictions," the Social Democrat Mueller said. "There is no reason to buy a jumper on the 28th of December, you can do that before then ... But something like this should or must take place nationwide."

The state government of Thuringia has already said it would be in favor of adding new restrictions, while rejecting the possibility of relaxing measures over Christmas and New Year's Eve holidays.

In Hamburg, authorities have now imposed a ban on mulled wine, the popular beverage that is a staple at Christmas markets, which are closed this year.

The sale of mulled wine to-go has been a controversial topic in cities like Cologne, where authorities say it is generating large crowds and unauthorized gatherings.

Saxony became the first state on Tuesday to announce the hardest measures so far. In-person schools, daycare centers and select stores are set to close as of December 14.

The state government said the harder measures were necessary because the influx of COVID-19 patients had left Saxony's hospitals "extremely burdened."

The eastern state has become the country's hotspot for coronavirus infections, with the number of newly confirmed cases per 100,000 inhabitants reaching almost 320 in a week.

UNICEF Germany told DW on Tuesday that wherever possible, schools should remain open.

Coronavirus: Germany is no longer a role model

Germany had hoped that a partial lockdown would be the best way to tackle the second wave of the coronavirus pandemic. But infection rates are still high and the number of people dying from COVID-19 is rising.