Germany At EU Helm Seeks to Revive Mideast Quartet | Germany| News and in-depth reporting from Berlin and beyond | DW | 28.12.2006

Germany is well-positioned to restart a Middle East peace process when it takes over the EU presidency Jan. 1. The recent violence in the Gaza Strip has Berlin concerned the fragile ceasefire could collapse. 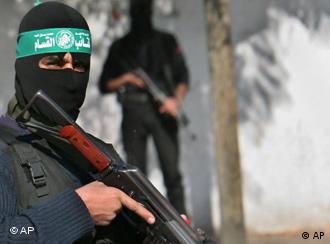 Nudging Middle East leaders and international mediators in the simmering conflict back on the path to peace will top Germany's agenda when it takes over the six-month European Union presidency on Jan.1.

Both German Chancellor Angela Merkel and Foreign Minister Frank-Walter Steinmeier have called for a January meeting to "revitalize" the Mideast quartet -- grouping the EU, the United States, the United Nations and Russia -- to help kickstart the peace process between Israel and the Palestinians.

Steinmeier said last week during a visit to Moscow that the aim
was for the group to exercise a "stabilizing" influence in light of
the deadly conflict between Palestinian factions and tentative hopes for peace talks.

"The carefully established lines of communications between
Israel and the Palestinians cannot be allowed to break," he said,
two days before Israeli Prime Minister Ehud Olmert and Palestinian president Mahmud Abbas met for the first time in six months. 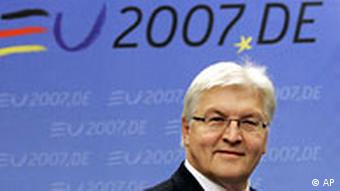 Steinmeier says Germany is committed to the Mideast peace process

Germany occupies a unique position in the Middle East due to its friendly ties to both Palestine and Israel. Supporters of both sides have called on the country to use its EU presidency to focus on Middle East issues.

Palestinian diplomat Hael al-Fahum said the German government can play a substantial role in the Middle East. Germany has the chance and ability to propose a fair settlement to the Middle East conflict, al-Fahum told the Reuters news agency.

"Its (Germany's) position as a long-time partner for Palestinians and at the same time a close friend of Israel places Germany in a strong position," the diplomat said.

The pro-Israel American Jewish Committee (AJC) has also urged Germany to use its presidency to push the EU to clearly voice its support for Israel against ongoing threats from Syria and Iran.

"It's important for EU countries in various international bodies to be united in supporting Israel against terrorist threats," Deidre Berger, the Berlin AJC director, told Reuters. "Germany takes a clearer position on this question than some other EU states."

Berlin worried by violence in Gaza 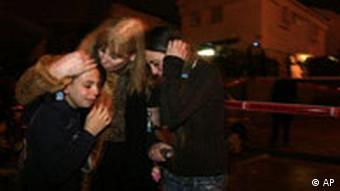 Israelis at the scene where a rocket hurt two teenaged boys.

The German government said Wednesday it was deeply worried by the latest eruption of violence in the Gaza Strip and warned against allowing the fragile ceasefire to collapse.

This week violence returned to the Gaza Strip as Palestinian militants and Israel exchanged rocket fire. Israel said it was not ending a month-long truce, but was forced to respond after a rocket attack wounded two Israeli teenagers.

"The situation in the Gaza Strip continues to fill us with great concern," foreign ministry spokesman Jens Plötner said at a news conference. "It threatens the hard-won ceasefire for the Gaza Strip."

Last week's meeting between Israeli Prime Minister Ehud Olmert and Palestinian president Mahmud Abbas provided an "important and positive step," Plötner said. "We hope that the momentum it created will not be endangered." 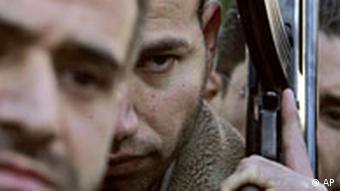 Germany will continue its efforts to bring about a peaceful resolution to the crisis during its EU presidency, Plötner added.

Plötner said Siniora had received assurances that Germany would
continue its efforts to bring about a peaceful resolution to the
crisis under its EU presidency. Steinmeier also spoke with Mussa and thanked him for his efforts in Lebanon.

"Both agreed that the current crisis in Lebanon can only be
resolved with a solution supported by all the interest groups in the
interest of national unity," Plötner said of Wednesday's telephone
call.

Steinmeier made a controversial visit to Damascus this month in
which he urged Syria to do "everything in its power" to prevent the
destabilization of Lebanon. The trip was called "a mistake" by Israeli Prime Minister Ehud Olmert.

Germany holds the command of the naval component of the UN force in Lebanon, in its first military deployment in the Middle East
since World War II.

Olmert Cautions Berlin against Including Syria in Peace Process

Assad Blames Israel for Tensions as Steinmeier Pushes for Peace

German Foreign Minister Frank-Walter Steinmeier met with President Assad in Damascus and urged the Syrian leader to engage in the peace process. But Assad held a belligerent stance, blaming Israel for current tensions. (04.12.2006)

After weeks of debate, Germany seems ready to take part in a UN peacekeeping mission in Lebanon. But it is desperate to avoid a situation in which its troops would have to fire on Israeli soldiers. (21.08.2006)