Germany: Alleged attacker of Turkish shops was IS supporter

A man suspected of carrying out attacks on Turkish shops in Bavaria was a follower of the Islamic State (IS) armed group, local authorities have said. He had several pipe bombs in his bag when police arrested him. 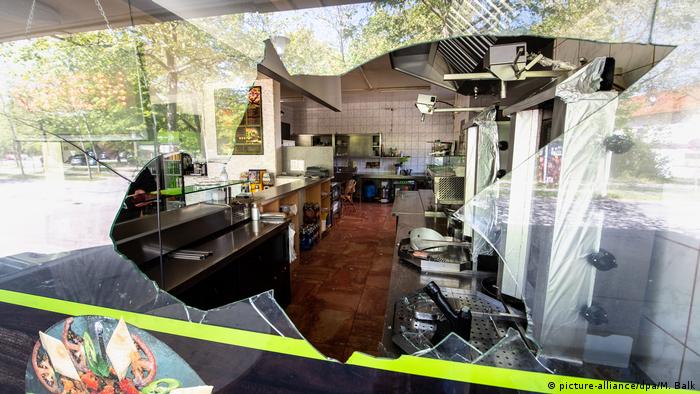 A man suspected of carrying out attacks against Turkish-owned businesses in the Bavarian town of Waldkraiburg is a sympathizer of the Islamic State, police authorities said Sunday in an online press conference.

The 25-year-old justified his hatred towards Turks and his "anti-Turkish worldview" by saying he was a supporter of the Islamic State, head attorney general Georg Freutsmiedl said.

The DPA news agency cited police as saying the suspect was carrying pipe bombs on him when he was arrested. He was also in possession of a firearm and had been planning more attacks, though initial investigations indicate no concrete plans.

Authorities did not say whether he had accomplices or sympathizers.

The suspect is a German citizen. His parents are Turkish immigrants.

'No longer a threat'

"I am relieved that the dangerous perpetrator no longer poses a threat," said president of the police headquarters in southern upper Bavaria Robert Kopp.

In April, three instances were reported where stones had been thrown through the windows of Turkish shops in Waldkraiburg. A vegetable stand was also set on fire, leaving six people injured

Police apprehended the suspect on Friday at a train station in nearby Mühldorf after he was caught traveling without a ticket.

Read more: IS takes advantage of coronavirus to ramp up attacks in Iraq, Syria

In his bag, police said they found 10 functional pipe bombs. They later found 13 more pipe bombs and 10 kilograms of explosive chemicals in a car left in a parking garage in the Bavarian town of Garching.

Police also searched the man's apartment, where they found more explosive materials as well as a gun.

The suspect has been charged with arson, dangerous bodily harm, and attempted murder.