Niels Annen, a top foreign ministry official, has said it is only a matter of time before Germany sees increased numbers of Afghan asylum seekers fleeing violence in Afghanistan as the Taliban continues to advance. A German lawmaker thinks that the Afghanistan conflict will impact Germany

As more Afghan provinces fall into the hands of the Taliban, a debate on migration is underway in the European Union, with Germany and the Netherlands stopping deportations of failed Afghan asylum-seekers, and other countries asking for deportations to continue.

Minister of State at Germany's Foreign Ministry, Niels Annen, told Germany's Funke Mediengruppe Thursday that it was "naive" to believe that the advance of the Taliban and the violence in Afghanistan would have no consequences for migration policy

"We will feel the effects in Germany as well, even if not in the coming weeks," Annen said.

An EU official on Tuesday said that the UN has estimated that 500,000 people could be pushed to leave Afghanistan for neighboring Pakistan, Iran and Tajikistan as the situation deteriorates.

In the EU, this is raising concerns that there could be a repeat of the 2015 crisis that saw around 1 million migrants — many fleeing the war in Syria — arrive in the EU and spark political upheaval.

Germany is "an attractive destination country" for Afghans, Annen said, partly due to the large diaspora community already settled in the country, he suggested. Support refugees before they head for Europe

Despite his concerns about the effects of the Afghan conflict on migration in Germany, Annen noted that: "Many hundreds of thousands of Afghan refugees are mainly heading to Kabulor neighboring countries, Iran and Pakistan."

Annen called on the international community to provide for the refugees in these neighboring countries and safe regions in Afghanistan.

The UN has said that so far this year there have been no "large-scale displacements" across Afghanistan's borders despite the Taliban's advance.

Iran and Pakistan already host "more than 2 million registered Afghan refugees in total" after decades of conflict in the country, the UN added.

However, the humanitarian situation in Afghanistan was growing more desperate by the day, Aisha Khurram, a student and former youth representative to the UN told DW on Wednesday.

"Thousands of passengers" were flying from the capital each day out of the country, Khurram added.

Meanwhile, countries in the EU remain undecided on whether they should make changes to their asylum policy, amid the worsening security situation.

The French government on Thursday said it had already stopped deporting Afghan migrants whose asylum applications had been rejected in early July, according to a statement seen by news agency AFP. 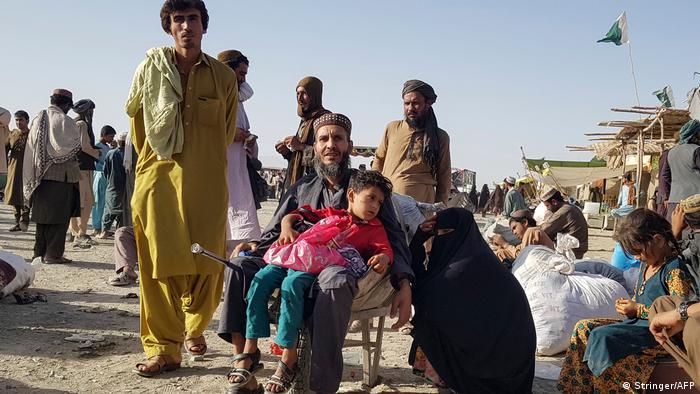 "We are watching the situation closely alongside our European partners," the French interior ministry said.

The announcement follows a day after Germany and the Netherlands said they were halting deportations. The move marked a turnaround in policy both both countries.

With four other EU nations, they had earlier co-signed a letter to the European Commission urging for deportations to continue, fearing that a pause might encourage more Afghans to migrate into the EU.

Greece, another co-signatory of the letter, said on Wednesday that the EU is no position to deal with a repeat of the 2015 migration crisis and must try to keep people from fleeing conflict in Afghanistan.

"It would lead to more people trying to leave and come to the European Union," Migration Minister Notis Mitarachi told Reuters news agency.

Afghanistan: 'Everybody is at risk'