Kurdish officials say a young German woman has died in battle against IS jihadists in Syria. Nineteen-year-old Ivana Hoffman was reportedly a member of the Marxist-Leninist Communist Party in Turkey. 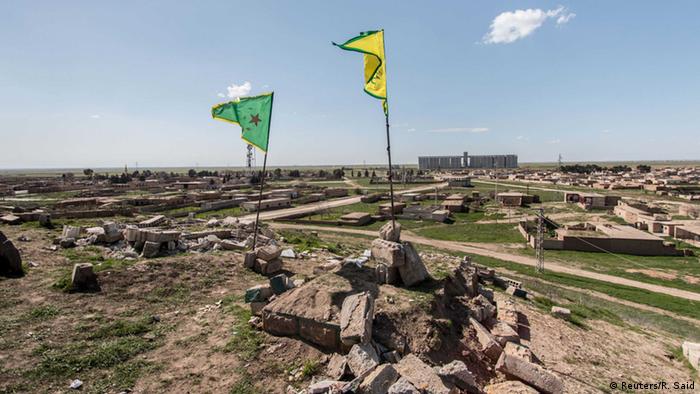 Hoffman was killed near the village of Tel Tamr in northeastern Syria on Saturday, according to Nawaf Khalil, a spokesman for the Kurdish Peoples Protection Units - a group Hoffmann is said to have joined six months ago.

The Kurdish forces, also known as YPG, are fighting members of Islamic State and are backed by US air strikes and local rebel fighters in Syria.

Tel Tamr is an area that has seen fierce fighting during recent weeks.

The Britain-based Syrian Observatory for Human Rights has also confirmed Hoffman's death. The 19-year-old was born in Germany to South African parents and had German citizenship. The exact circumstances of her death are not clear.

She is the first foreign woman to die fighting alongside Kurdish forces in Syria, the Observatory said.

The German government has not confirmed her death.

According to the Kurdish news agency Firat, Hoffman was also a member of the Turkish Marxist Leninist Communist Party. A number of party members allegedly joined the ranks of Kurdish forces in order to combat the Islamic State.

Women at the frontline

Idriss Nassan, spokesman for the Syrian Kurdish authorities in Kobani, paid tribute to the young German.

"We believe that this great lady believed in the fight for freedom and democracy and came and joined our forces because she wanted to fight along our side, and because she believed that what we are fighting for was right a cause," he told German news agency dpa.

Ivana Hoffman also allegedly appeared on a YouTube video, saying that she came to Syria because she wanted to fight for freedom.

Women make 35 percent of the YPG forces and receive the same training as their male comrades.

Over a hundred Westerners

The Syrian Observatory for Human Rights estimates that just over 100 Western fighters have joined the Kurds in Syria. They include Americans, French, Spanish and Dutch fighters, among others.

At the same time, the number of foreign militants fighting on the side of jihadists in Syria is believed to be much greater.

Thousands of Iraqi troops and militia are continuing to attack strongholds of the extremist group "IS" north of Baghdad. It is one of the biggest offensives yet against the jihadists. (03.03.2015)