German wage rises over decade fall well below European average | Germany | News and in-depth reporting from Berlin and beyond | DW | 08.09.2010

Increases in private-sector pay in Germany over the past decade have been significantly lower than in the EU as a whole. Workers in parts of eastern Europe have enjoyed a wage boom over the same period. 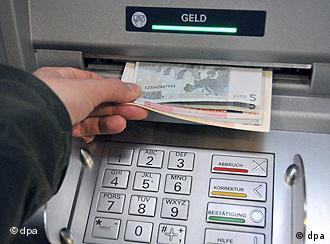 Germans have seen wages rise, but by a modest amount

Wages in Germany have gone up less than in most EU countries in the past 10 years, the German Federal Statistical Office reported on Wednesday.

Figures showed that wages in Germany's private sector increased by 21.8 percent on average from early 2000 to the first quarter of 2010.

In contrast, the figures for the EU as a whole showed an increase for the same period of more 35.5 percent. The average increase across countries using the euro was 29.5 percent.

Boom in the east

Eastern European countries that have entered the EU during the timeframe of the study showed the greatest increases. Romanian private-sector workers saw their net incomes rise by 559.3 percent over the decade, the study showed, with increases of 217.2 percent in Latvia and 174.8 in Bulgaria.

Of the 21 EU countries for which national figures were given by the report, Germany's public sector wage increase was the lowest for the decade.

The low increase in wages in the German public sector was accompanied by a similarly low rise in the non-wage costs that employers pay for employees. For Germany, these expenses, which also include social security and pension contributions, rose by 9.3 percent compared with 38.5 percent for the EU as a whole and 32.7 percent for the eurozone.

Prominent economic experts are currently engaged in a debate on wage levels and their potential impact on economic growth in Germany. So should workers get a raise, or make do with what they earn now? (02.08.2010)

Gender wage gap in Germany is among the EU's highest

In 2009, women earned almost 24 percent less than men in Germany,where the gender pay gap is higher than the European average. The European Commission has outlined a plan to advance women's equality in Europe. (05.03.2010)

The wage gap between men and women is much lower in eastern Germany than in the western states, research suggests, citing better availability of day care in the east as the most decisive factor. (28.10.2009)