A theater is under investigation for promising free entry to spectators who wear a swastika to a play named after Adolf Hitler's "Mein Kampf." The theater has defended the move as a social experiment. 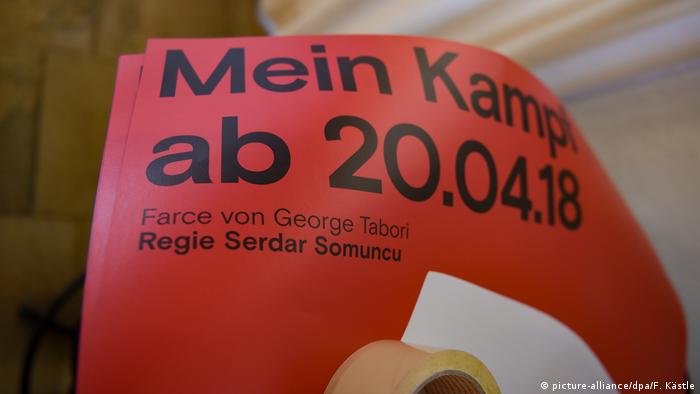 German prosecutors have launched a probe into a theater's plans to offer free tickets to a play named after Adolf Hitler's "Mein Kampf" to people willing to don a swastika.

A spokesman from the prosecutor's office in the southern city of Constance said it had received a number of complaints about the theater's offer. Under German law, publicly displaying the National Socialist symbol is illegal, with very few exceptions.

The theater is offering free admission to those spectators willing to wear an armband with a Nazi swastika, given to them ahead of the performance on April 20, Hitler's birthday.

Those who pay for a ticket will be asked to wear a Star of David "as a sign of solidarity with the victims of barbarism," the theater's operators wrote on their website.

The prosecutors will determine whether the offer falls under freedom of artistic creation.

The offer has created an uproar, with the region's German-Israeli Society calling it "tasteless."

The theater has defended the idea, saying it was aimed at showing how easily people can be corrupted. It told German broadcaster SWR that the number of people willing to wear swastika for free tickets was surprising and frightening.

According to the theater, writer-director George Tabori's take on Hitler's autobiography "Mein Kampf" is a caricature of the Nazi leader's early years.

The controversy comes as Germany grapples with a rise of anti-Semitism, especially in schools.

Rappers Kollegah and Farid Bang have come under fire for lyrics comparing themselves to Holocaust victims. Lawmakers, business leaders and Jewish groups have all condemned the pair. (15.04.2018)

Germany's Interior Ministry supports the Central Council of Jews, whose chairman said those who disrespect German values should be stripped of their right of abode. It comes as Germany grapples with rising anti-Semitism. (09.04.2018)