A synagogue in one of the German capital's most Muslim neighborhoods and a Jewish trade school are two projects Berlin is pursuing in an attempt to counteract growing anti-Semitism. But will they change anything? 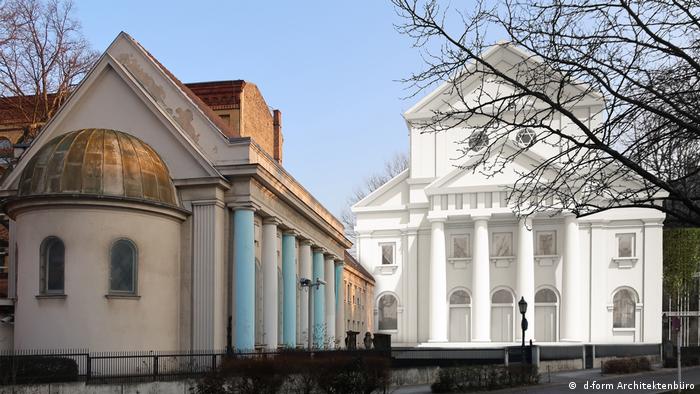 Most Germans know the eastern half of Berlin's Kreuzberg district as one of the most conspicuously Turkish and Muslim areas of the country. So the symbolism of rebuilding a synagogue there is impossible to overlook.

And as if to underscore the significance of this project, the same day representatives of the city government and Berlin's Jewish community publicly introduced their plans, a major local paper reported that the number of anti-Semitic crimes committed in the city increased almost 100 percent between 2013 and 2017, from 149 to 288.

"I think it's not only necessary, but long overdue that we send a signal of welcome to Jewish life in Berlin and Germany," Berlin Social Democratic parliamentary leader Raed Saleh told reporters in front of the one remaining wing of the synagogue. "Where, if not in Berlin on this site, can we send a signal that society is not being driven apart?"

The Palestinian-born Saleh — who came to Germany with his parents as a child and is a leading voice for intercultural understanding in Berlin — said he would be soliciting donations for the project in "churches, synagogues and mosques." The chairman of the Jewish Community in Berlin, Gideon Joffe, also said a reconstruction of the synagogue would offer much-needed reassurance.

"We have to ensure that our members can actively live out Jewishness," Joffe said. "At present that's under threat."

Past ghosts meet a present community This was how the Fraenkelufer Synagogue looked in its heyday

The wing of the synagogue that is still used today somehow survived the Third Reich. But the main building was destroyed during the 1938 Night of Broken Glass pogrom and the final months of World War II. It is now an eerily empty space on a picturesque stretch of Berlin's Landwehrkanal.

Built in 1916 by the Jewish-German architect Alexander Beer, the Fraenkelufer synagogue once served a neighborhood Jewish community of more than 6,000 people. Under the racist laws instituted by the Nazis, Beer was deported to Theresienstadt concentration camp where he was murdered in 1944.

After the war, eastern Kreuzberg — together with the districts of Neukölln and Wedding — became home to increasing numbers of Muslims, mainly Turks, many of whom came to Germany as "guest workers" and helped rebuild the country.

Reliable estimates are hard to come by, but figures suggest that to this day somewhere between a quarter and a third of all Kreuzberg residents are Muslims, and mosques feature prominently in the neighborhood cityscape.

Meanwhile, in the entire German capital, there are only around a dozen synagogues, including the one on Fraenkelufer. The rebuilding of the main section of the synagogue is not intended to be a fully accurate historical reconstruction of the building that once stood there. Instead, one of the preliminary architectural designs foresees an abstracted version of Beer's original in ghostly white that would signify the absence of the Jewish life destroyed by Nazi anti-Semitism.

New forms of a hatred with a long history

Right-wing anti-Semitism remains a problem in Germany, but there are also worries about a rise in Islamist hatred for Jews, particularly with the influx of Muslim migrants into the country over the past few years. Such fears have been stoked by highly publicized cases like that of a Jewish student driven by racist taunting from his Berlin high school.

To counter that trend, Berlin's Jewish community is building the first-ever trade-oriented Sekundarschule school in post-war Germany. Jewish Gymnasien (university track high schools) already exist, but community leaders say Jewish kids who don't want to pursue higher education need to be taken out of the line of fire, too.

"We know from lots of conversations that students at Sekundarschulen have much bigger problems," Joffe said. "That's why we're doing everything we can to found one as soon as possible."

The school will be located on a street in Berlin's Mitte district where the architect Beer once constructed a well-known Jewish girls school.

Symbolic buildings are not enough

Joffe admits that there's a "bitter irony" to founding a specifically Jewish school in part because of fears of intolerance and lack of acceptance. But he stresses that all of Berlin's Jewish schools are open to non-Jews and that 50 of the students there are in fact Gentile.

"In that respect, these educational institutions are also automatically places for people to encounter one another and interact," Joffe said.

But can a Sekundarschule or a rebuilt synagogue really do anything to change anti-Semitic perceptions?

"It's difficult," Joffe acknowledged to DW. "Jewish life has disappeared from the streets. We've built buildings and set up kindergartens and synagogues. But the majority of Jews don't show themselves as Jews [in public]."

If and when it becomes reality, the rebuilt Fraenkelufer Synagogue will join the ranks of architectural symbols of Jewish culture in Berlin, of which there are many in the capital. But it will be far more difficult, perhaps impossible, for the city to eradicate anti-Semitism in all its forms.