Rappers Kollegah and Farid Bang have come under fire for lyrics comparing themselves to Holocaust victims. Lawmakers, business leaders and Jewish groups have all condemned the pair. 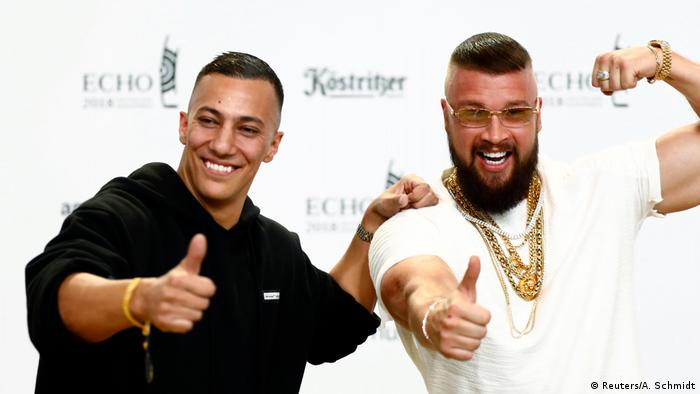 His comments were similar to that of Justice Minister Heiko Maas, who told Der Spiegel on Saturday that "anti-Semitic provocations do not deserve a prize; they are repugnant".

On Thursday, which happened to be Israel's Holocaust Remembrance Day, Kollegah and Farid Bang were awarded the Echo Prize for their top-selling 2017 album "Jung, brutal, gutaussehend 3" (Young, Brutal, Good-looking 3).

In the song "0815" on that album, the rappers say their muscles are "more defined than Auschwitz prisoners" and then a later lyric says "I'm doing another Holocaust, coming with a Molotov."

The decision to give the pair a prize was even criticized on stage at the Echo ceremony by Campino, the lead singer of Germany's legendary punk band Die Toten Hosen, who received a standing ovation for his comments.

The BMVI Music Group, which hands out the Echo awards, initially said it would not change its rules, saying that the artists were nominated based on sales numbers, and not on quality. However, on Sunday CEO Floridan Druecke said organizers would reconsider the nomination and selection process.

In an essay for the Die Welt daily, Jewish comedian Oliver Polak said that the normalization of anti-Semitism in popular music was part of the reason "that young Jewish people are chased around and beaten up in schoolyards." Sentiments similar to Polak's were expressed by several prominent Jewish organizations.

The furor has come at a particularly sensitive time for Germany, which has been dealing with reports of increased anti-Semitic incidents.

A punk rock vocalist has criticized two award-winning artists for invoking Auschwitz to describe their "defined" bodies. The hip-hop artists have distanced themselves from anti-Semitism after public outrage in Germany. (13.04.2018)