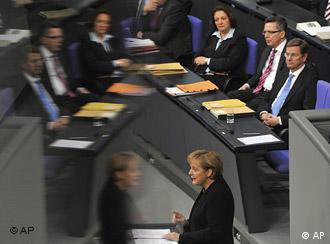 However, the tax cuts have been strongly criticized by many since Germany, traditionally very fiscally prudent, is already faced with a large amount of debt. State leaders from within Merkel's own party, the Christian Democrats (CDU), had threatened to block the bill.

But the two final states which were potential hurdles, Saxony and Schleswig-Holstein, saw their CDU leaders drop their opposition.

Schleswig-Holstein Premier Peter Harry Carstensen told reporters Friday was “a good day for Germany” and that “the fighting and resistance were worth it.”

Despite the tax relief promised by the government, a recent poll by the Forsa institute shows 69 percent of Germans disapprove of tax breaks at this time.

The global financial crisis has drastically hampered public finances, with Merkel's government predicting the national debt will rise to 85.5 billion euros ($123.12 billion) in 2010.

Chancellor Angela Merkel has held crisis talks this Sunday with members of her Christian Democratic Union party who are opposed to her plans to slash taxes in order to boost the economy. (13.12.2009)

Germany's Bundestag has passed a sweeping tax reform package aimed at stimulating the economy. Families, inheritors, businesses and the hotel industry all stand to gain from the bill worth 8.5 billion euros a year. (04.12.2009)