Police have arrested two German men suspected of fighting alongside the "Islamic State." The state of North Rhine-Westphalia is boosting security after a number of residents have been accused of aiding IS. 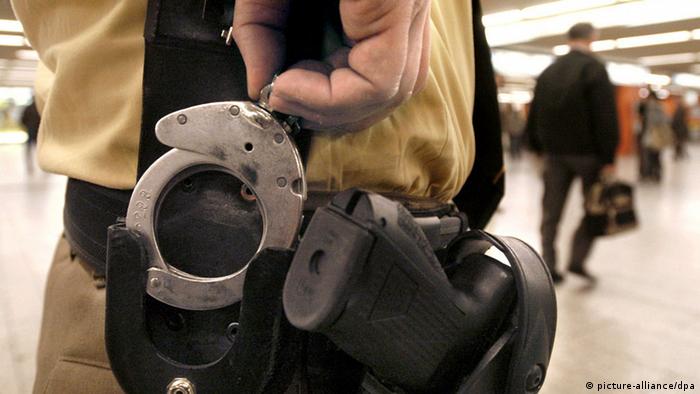 Police arrested 26-year-old Mustafa C. and 27-year-old Sebastian B. on Thursday in North Rhine-Westphalia (NRW), Germany's most populous state. Prosecutors said they had traveled to Syria in 2013 to fight with Muhajirun Halab (Aleppo Migrants), a group that would later join up with the "Islamic State" (IS). Authorities also suspect the men of having trained to fight a holy war and undertaken logistical tasks such as providing transport for food and supplies to the front line in Syria.

On Thursday, NRW officials announced that they planned to add about 385 police and intelligence officers to aid their fight against extremism. "The attacks in Paris show: There is a new quality of threat," state Interior Minister Ralf Jäger said Thursday in Düsseldorf, referring to the January 7 assault on the satirical magazine Charlie Hebdo and the killing of a police officer three days later, followed by shootings at a kosher supermarket. "That's why we are strengthening the security authorities decisively."

Authorities have grown increasingly worried about possible attacks in Germany by fighters who have returned after joining IS and similar groups in Syria and Iraq. Fears have heightened after the attacks earlier this month in France, which has since boosted security measures.

According to security services, about 600 German residents have joined militant groups in Syria and Iraq. Of those, about 60 have died in combat and an estimated 180 have returned home. The topic of fighters coming back to Europe after combat in Syria and Iraq was high on the agenda at US-led anti-IS coalition talks Thursday in London.

Three other defendants, all of whom are from the city of Bonn, are also on trial in the high-security wing of the higher regional court Düsseldorf, and accused of supporting IS. One of the defendants, Karolina R., is accused of supplying Islamic State with about 11,000 euros ($9,500) and cameras for making propaganda videos.

Twelve days ago, authorities arrested another man in the NRW city of Dinslaken-Lohberg. He had allegedly belonged to IS's Lohberg Brigade.

Authorities have made arrests elsewhere in Germany as well. Anti-terror raids in Berlin Tuesday netted police various pieces of evidence, they say. That same day, a man went on trial in Munich, accused of having fought in Syria.