Representatives of the coalition against the "Islamic State" are gathering for talks in London. The meeting comes as Japanese officials are racing the clock to gain the release of two hostages held by IS. 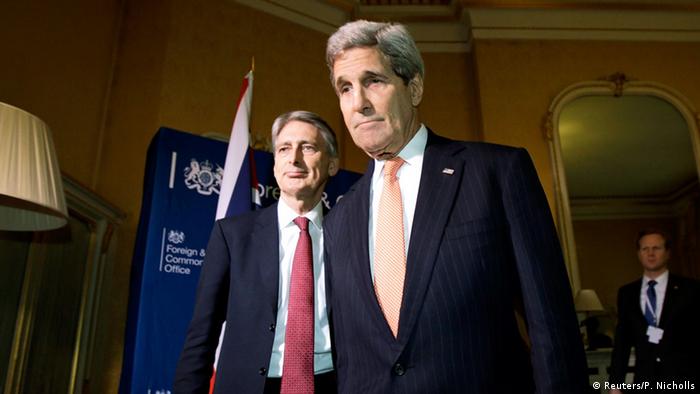 US Secretary of State John Kerry and British Foreign Secretary Philip Hammond are co-hosting representatives from 21 countries working to tackle the "Islamic State" (IS) in Syria and Iraq. Thursday's talks mark the first time the US-led coalition has met since attacks in Paris this month left 17 people dead.

"We need to move ahead on every single front, militarily, but also through law enforcement, through intelligence sharing, by attacking the root causes so that terrorist appeals fall flat and foreign recruits are no longer enticed to go a place and wreak havoc on it," Kerry said on Wednesday.

The attacks in Paris have rekindled fears that fighters could return from foreign battlefields to wage war at home. The police agency Europol estimates that 5,000 EU citizens have joined IS and similar groups, and last week an interview with a German IS fighter surfaced on the Internet.

EU foreign policy coordinator Federica Mogherini called the coalition "a partnership that unites us all against a phenomenon that is brutally devastating societies all over - starting with the Arab countries." On Monday, EU foreign ministers agreed to seek out a multinational alliance with the leaders of Muslim countries to battle terror threats.

The London talks will also address military efforts to support both Iraq's military and Kurdish armed forces, how to cut IS's financing and counter its propaganda, and how to provide humanitarian assistance for people caught in the crossfire.

IS has threatened to kill Japanese journalist Kenji Goto and Haruna Yukawa, the founder of a private security company, within 72 hours if the group did not receive a ransom of $200 million (170 million euros) - double the amount their country had pledged to the US-led coalition. Based on the video's release time, that deadline would come sometime Friday, perhaps as early as 2:50 p.m. Japan time (0550 UTC).

"We have not been able to confirm their safety," Chief Cabinet Secretary Yoshihide Suga told a press conference in Japan on Thursday, adding that the country had pledged the money for nonlethal purposes.

"(IS) are totally wrong about our position," Suga added. "We wish not to fight against the world of Islam: We want to help the more than 10 million refugees in the region. This is humanitarian and nonmilitary support. We want them to understand this - and free the hostages immediately."

Suga said Japan hadn't received any message from IS since the video. Foreign Minister Fumio Kishida will not attend the London meeting, but he held talks with Hammond on Wednesday as Japanese Prime Minister Shinzo Abe said the country found itself in a "race against time" to free the men.