Police have conducted searches at a number of premises in Berlin as part of an investigation into an alleged Islamist logistics cell. The flats belong to alleged associates of two suspects arrested last Friday. 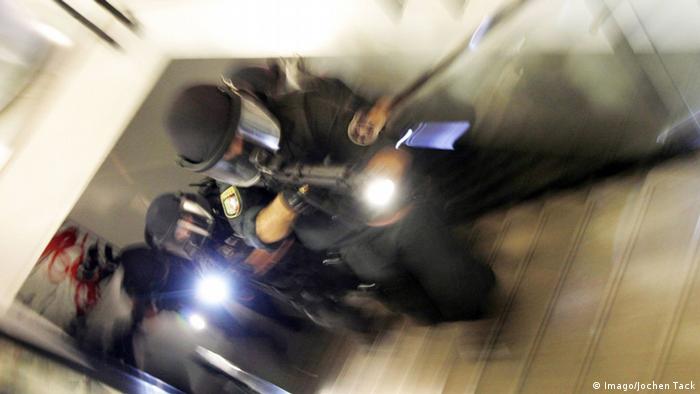 Police said on Tuesday that they had searched 12 apartments in and around Berlin as well as another in the eastern state of Thuringia. Around 200 police officers were involved in the operation, as well as a special forces unit.

A police spokesman told the DPA news agency that the residences searched belonged to alleged associates of two suspects, aged 41 and 43, who were arrested in Berlin on Friday. According to police, the 41-year-old suspect is thought to have actively recruited students as supporters of the "Islamic State" militant group in Syria.

The spokesman said the residents of the flats in question were not being treated as suspects at this time, but that various objects, including computer hard drives had been confiscated.

He also said there was no evidence at this time that the group was planning attacks in Germany.

The raids come amid heightened security in Europe, following the recent deadly attacks on the satirical magazine Charlie Hebdo and a kosher supermarket in Paris almost two weeks ago, as well as a series of police raids in Belgium late last week, which police said had foiled a major terrorist attack.

Monday evening's march of supporters of the anti-Islamization group PEGIDA in the eastern German city of Dresden was banned after the authorities received information indicating that there could be an attack on one of its leaders.