Members of the far-right NPD have been allowed to tour a refugee center in northeastern Germany, despite a previous ban. Their mainstream colleagues decried the trip as propaganda. 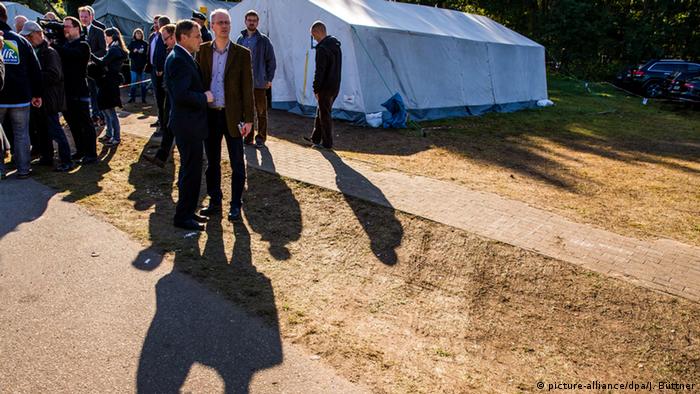 The five NPD politicians visited the facility on Monday in their capacity as members of Mecklenburg-Vorpommern state parliament.

The NPD was only allowed to visit the home after winning a court injunction, which overturned the earlier ban by state authorities. The officials had claimed that such a visit would disturb "peaceful coexistence."

Indeed, the far-right politicians lost no time in criticizing the camp for its abundance, the exact opposite depiction of widely reported stories, which have underscored the fact that refugees pouring into Germany are only receiving the bare minimum.

"Many Germans could only dream" of the conditions provided by the center, said the NPD parliamentary group leader Udo Pastörs.

According to other participants in the tour, the NPD leader also remarked on the lack of pork during lunch, wondering if people who eat pork were discriminated against. A server allegedly replied that the overwhelming majority of migrants were Muslim.

Pastörs' remarks were sharply criticized by other lawmakers in the state parliament, who claim that the NPD was aiming to stir hatred and intolerance.

"It is absurd and cynical to pretend that the refugees here are living in [extreme luxury], after many of them came here with nothing but their lives," the state's SPD faction leader, Norbert Nieszery, said.

"They do nothing but feed the flames," said Johann-Georg Jäger from the Greens party.

The more moderate parties sent their representatives - wearing shirts with slogans praising diversity - to join the tour, in a show of support for the immigrants.

Mecklenburg-Vorpommern is the only state where the NPD is represented in the parliament; the party has no seats on the federal level.

New attacks in the state

After the tour, the SPD politician Nieszery also accused leading NPD members of being on the frontlines of various anti-refugee protests across the state.

Mecklenburg-Vorpommern has been the site of several clashes between far-right protesters and security forces, with over 1,000 people taking part in anti-refugee street marches last week.

On Monday, an unknown attacker broke two windows by throwing stones and a beer bottle at a refugee home in the town of Pinnow, before fleeing the scene in a car, police said.

Germany's states are petitioning the country's highest court for the second time to ban the far-right NPD. Although their motives are commendable, the real problem goes much deeper, says DW's Marcel Fürstenau. (04.12.2013)