Germany's states are petitioning the country's highest court for the second time to ban the far-right NPD. Although their motives are commendable, the real problem goes much deeper, says DW's Marcel Fürstenau.

Germany's National Democratic Party (NPD) is an unconstitutional party. Those who question that just need to have a look at the country's Basic Law - specifically, at Article 21, Paragraph 2: "Parties that, by reason of their aims or the behavior of their adherents, seek to undermine or abolish the free democratic basic order or to endanger the existence of the Federal Republic of Germany shall be unconstitutional."

Of course, the NPD is relatively skillful in avoiding giving the impression that it wants to abolish democratic order or even endanger the German republic. In fact, there's no serious evidence that the far-right party has plans to topple the state.

However, some points of the group's aggressive and militant agenda are recognizably and demonstrably unconstitutional. The NPD could be brought down on this basis, provided the idea of a "free democratic basic order" is more than just a theoretical construct. 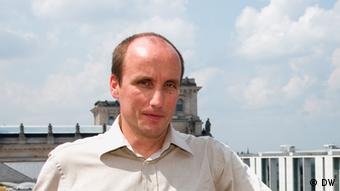 The constitution has the answers

In reality, there can and should be no compromises in this respect. What's at stake is the atmosphere of peace and tolerance among all people. Again, a look at the Basic Law is instructive. Article 3, Paragraph 3 says, "No person shall be favored or disfavored because of sex, parentage, race, language, homeland and origin, faith, or religious or political opinions."

This view is fundamentally alien to the NPD. In fact, its platform states the exact opposite. "Mass immigration" and the "altering of ethnic majorities" are categorically rejected as "an assault on the integrity and identity of our people." The basic tone of the party is straightforwardly xenophobic and racist: "Criminal foreigners" are to be expelled and handed a "lifelong ban on returning," while unemployed and "culturally foreign" people should be sent back to their home countries "in order to protect our social welfare state as well as our national identity in an effective way."

This attitude is reprehensible, and the language is repulsive. But is this enough to justify banning the party? The answer is, clearly, no. Legally, rhetoric like this would most probably be seen as protected under the laws relating to free speech. In the most severe instance, the leaders and sympathizers of this unsavory party could be charged with defamation or with incitement of popular hatred [Ed. note: a form of hate speech punishable by law in Germany].

The NPD does not, however, represent a threat to the existence of the Federal Republic. Those who assert the contrary are unintentionally overestimating the party.

The federal government and parliament fear that the renewed attempt at banning the NPD will simply result in another legal failure, as it did in 2003. That's why those two entities are leaving the legal petition to the federal states this time.

As such, the government is not signalizing unity on the point this time around. The NPD already views as a minor victory. Minor it may be, but it is still irritating and could have been avoided.

The insistence on re-trying the petition to ban the party has deeper reasons. It reveals much about Germany's politics on social issues and the widespread failures of state institutions in connection with the murderous National Socialist Underground (NSU). [Ed. note: This militant neo-Nazi group carried out a series of murders from 2000 to 2006 without law enforcement officials connecting their crimes.]

The bad conscience of true democrats

The NPD has secured seats in the state parliaments of Mecklenburg-Vorpommern and Saxony, and it happily uses these as stages for its propaganda. This is something that mature democratic parties should be able to deal with competently, but instead they are plagued by a bad conscience.

The right-wing radicals like to present themselves as upstanding activists in regions suffering from high unemployment and other social problems, where they offer aid to the people, including some who are genuinely suffering from neglect. But the NPD's purportedly selfless social engagement is coupled with xenophobic slogans. This is tacitly accepted or, worse yet, falls on fertile soil.

When it comes to the NSU, which allegedly committed 10 racially-motivated murders, the situation is much more complex and opaque. There is evidence that the NSU did have some connections with the NPD, as in the case of Ralf Wohlleben. This high-ranking NPD member from Thuringia, where the alleged NSU murderers are from, is currently being tried in Munich's upper regional court for abetting the murderers.

But even if Wohlleben is convicted on these charges, a single case is not enough to prove that the far-right party was deeply involved in the NSU's crimes. Its approximately 6,000 members could not be held liable on that basis alone.

As such, the German states petitioning to ban the NPD are doing so on rather scant evidence. The information used in the petition stems, according to official statements from those involved, entirely from publicly available sources. They include campaign materials, press statements, and records of party conventions and demonstrations.

Material from paid informants associated with the German intelligence community is said to have not been included. A lack of transparency regarding the role of such informants was a reason why the Federal Constitutional Court ultimately did not hear the case during the 2003 attempt to ban the party.

Germany's highest authorities on constitutional matters will have to decide on the renewed petition to outlaw the NPD against the backdrop of the NSU murders and a rise in ring-wing populism throughout Europe. If they do decide to hear the case, a verdict could be rendered as early as next year.

Racism doesn't depend on the NPD

All else aside, two things have been documented by countless studies and investigations. In Germany, certain forms of misanthropy are widespread. Also, intelligence officials failed utterly in the case of the NSU's right-wing terrorism.

Ultimately, then, what is more important than prohibiting the NPD is the political and social question of responsibility for xenophobia and racism, and how these phenomena can be combated effectively.

Germany has long debated whether or not it should ban the far-right NPD, the National Democratic Party, by using its constitutional laws. Each time though, the debate has been thwarted. So can Germany ban the NPD? (03.12.2013)