A concert venue in eastern Germany has blocked leftist punk band Feine Sahne Fischfilet from performing over fears they could incite far-right protesters. Critics have called the decision an assault on artistic freedom. 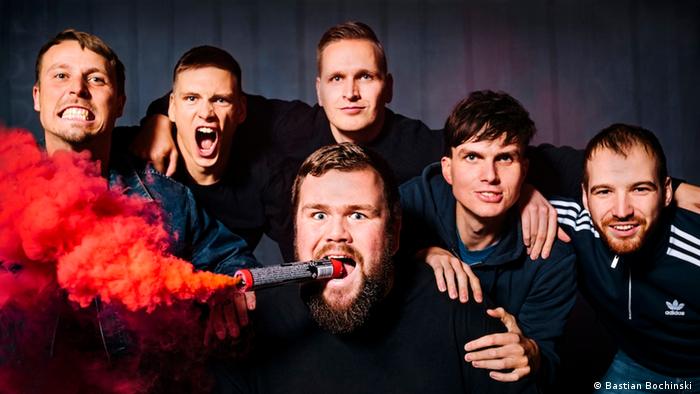 German punk band Feine Sahne Fischfilet has lashed out at the Bauhaus Foundation after it canceled an upcoming concert, citing threats from right-wing groups.

The band was scheduled to perform at the Bauhaus Dessau building in the eastern town of Dessau-Rosslau on November 6. But when far-right activists called for protests on social media, the foundation said it could not let the gig go ahead because it did not want to create a space for political agitation and aggression.

Culture and rights groups have criticized the decision, while Feine Sahne Fischfilet accused the venue of bowing to pressure from the local neo-Nazi scene. The band, known for its sometimes controversial left-wing views, said in a statement on its Facebook page that the cancellation set "new standards in wretchedness." Concert to go ahead

"When we and many other people back off straight away from every small intimidation and call off every concert that drives Nazis crazy, then pretty much nothing would be allowed," the band wrote.

The musicians added the concert would still go ahead in Dessau-Rosslau, but at a different venue.

Berlin's senator for culture, Klaus Lederer of the Left party, later also invited the musicians to perform in the capital's Bauhaus archive on a separate date yet to be determined.

The Bauhaus was a renowned German art and design school that was set up in three cities — Berlin, Dessau, and Weimar — between 1919 and 1933. It was closed by its own leadership under pressure from the Nazis.

Read more: The legacy of Bauhaus 100 years on

German Culture Minister Monika Grütters said the Bauhaus should never "create the impression that pressure from the right-wing extremist scene is enough to prevent a concert."

Dark periods of German history have taught us that protecting artistic freedom is crucial, she added. "That's why we have to demand that everyone involved take on this responsibility," she said.

But Grütters also pointed out that Feine Sahne Fischfilet had in the past been monitored by the security services because some of their lyrics suggest "left-wing extremist tendencies."

From Weimar to Dessau to Berlin

From Weimar to Dessau to Berlin

The German Cultural Council called the cancellation a scandal. "Fear of right-wing protests — a foundation that preserves the Bauhaus legacy should know that [fear] must never gain the upper hand," the council's managing director, Olaf Zimmermann, said on Twitter.

However, Rainer Robra, the culture minister in the state of Saxony-Anhalt where Dessau-Rosslau is located, defended Bauhaus' decision, saying the institution was not compatible with political clashes.

Feine Sahne Fischfilet performed at a major concert in Chemnitz in September in a show of solidarity against the right-wing riots that shook the eastern city following the death of a German man, allegedly at the hands of migrants.

As a former member of the advisory board for the Echo prize, Christian Höppner accepted the nomination of the controversial rappers Kollegah and Farid Bang. Their popularity demonstrates a deep social rift in Germany. (18.04.2018)