The Bauhaus buildings in Weimar and Dessau may be monuments, but they are by no means relics of a bygone era. Relying on the Bauhaus pioneering spirit, they are used today for teaching and research based on fresh ideas.

When children living in Weimar in the 1920s did not obey, people said: "If you are not good, then you will be put in the Bauhaus." It was "crazy people" who lived at the art school — who danced noisily through the streets in colorful theater costumes and painted pictures using triangles, circles and squares.

Today, students from all over the world come to study at the successor institution, Bauhaus University in Weimar. With nearly 4,100 students from 70 countries, it is one of the most international universities in Germany.

The Bauhaus sites in Weimar and Dessau have been UNESCO World Heritage Sites since 1996. This attracts tourists and students alike.

The idea of interdisciplinary work 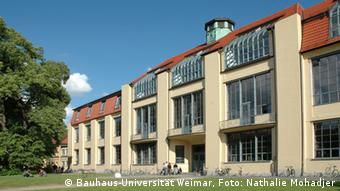 There are no more workshops for painting, furniture building, weaving or metal in the historic and new buildings of Bauhaus University. Originally, under the leadership of founding director Walter Gropius, artists and craftsmen were intended to work together and learn from each other. Today, the university offers departments of architecture and urbanism, art and design, civil engineering and media.

However, the idea that students can work in individual modules and projects across departments lives on, especially in the anniversary year, said Nathalie Singer, professor for experimental radio and vice-president of Bauhaus University. "In my group, for example, an audio walk is created in which media designers and people from the audio sector work together with monument conservators from architecture. The monument conservators generate the contents of '100 years of Bauhaus,' which are then implemented by the media people in the audio tour," she explained.

The interplay of art and technology

At the beginning of the 1920s, Bauhaus designers worked closely with industrial production. Bauhaus artists designed products with simple shapes that were easy to handle. Walter Gropius wanted art and technology to form a new unity.

Members of Bauhaus University now no longer design products for the industry, but they do pursue research about what new technologies mean for society.

Kicking off in October 2018, Bauhaus University in Weimar will offer a "Bauhaus semester" to mark the centennial. "In lecture series and colloquia, for example, we will consider which ideas from that founding period can be transferred to our digital age or how they can be applied to our questions about the relationship between man, nature and technology," said Singer. "For example, we are now facing the huge question of how digitization shapes design, but also how it affects society and social behavior." 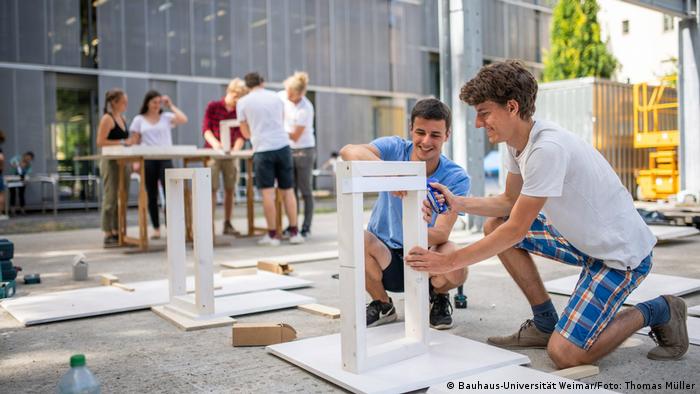 To mark the centennial, architecture students are creating spaces where guests can get information about Bauhaus

Sustainability now also plays an important role among civil engineers and architects. Following World War I, the main aim of Bauhaus artists was to build inexpensive and practical buildings to make mobility and work easier for people. At that time, there was no talk of sustainability and energy efficiency. "These are issues that are more important today," said Singer. "Researchers will present their results to society. We have also applied for patents which will then be applied."

In 1925, the Bauhaus "madhatters" were forced to move from Weimar to Dessau due to the tense political situation. There, architect Walter Gropius designed a school building that continues to captivate with its fluid glass facade. Today, the world cultural heritage is considered an icon of modernity.

Turkish architecture doctoral student Eci Isbilen came from Virginia Polytechnic Institute and State University in the United States to take part in an lab at the Bauhaus Academy in Dessau.

Today, the Bauhaus is a popular destination for architecture enthusiasts on a pilgrimage, she said — even if the construction no longer meets today's building regulations. "You have to experience this place for a longer period of time to be able to understand its advantages," Isbilen said. "The large windows suit this place," she noted. "You can open them on both sides. It is pleasant to work when it is hot outside, so the building is efficient in another sense as well." 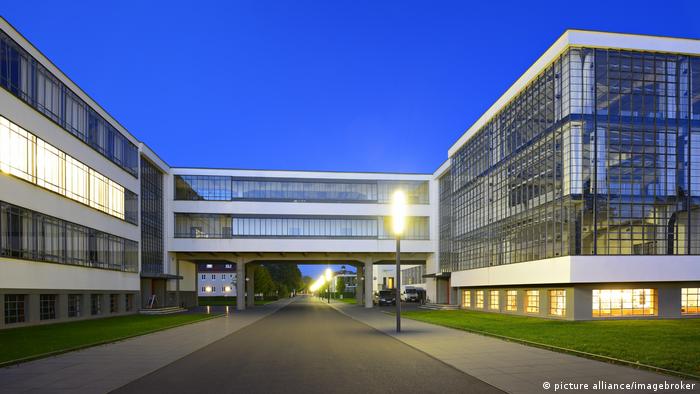 Bauhaus in Dessau, an icon of modernity

The academy, which belongs to the Bauhaus Dessau Foundation, offers not only labs, but also one-year master's programs in cooperation with the Anhalt University of Applied Sciences and Humboldt University of Berlin. The Bauhaus school in Dessau was reopened in GDR times as a mixture of cultural and research institutions. The foundation, created in 1994, continues to promote this approach.

For a long time, there were still workshops at the Bauhaus in Dessau. Those involved also devoted time to social issues and integrated urban development projects into their work up through the 2000s.

Recently, this focus has shifted towards local curatorial work, explained Regina Bittner, director of the academy. "With the Bauhaus buildings and the new museum, which will open in the anniversary year, we are attempting to make references from the Bauhaus legacy to the present and to incorporate objects from our own collection into design science." 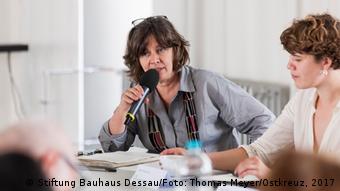 Regine Bittner during the symposium "Between Chairs. Dialogues about Design and Handicrafts"

Take a concrete object with a history of change, such as a Bauhaus designer's desk or chair. These objects would then be examined in the context of parallel developments. "To mark the anniversary, we want to take a different look at Bauhaus in the context of today's globalization. It's no longer about seeing the history of Bauhaus and its influences on the world," Bittner explained. Rather, Bauhaus is being explored today in the context of a cultural modernity in which there is a fruitful exchange between the regions of the world.

Bittner recalls a guest student from Colombia who studied the textiles of Bauhaus artist Anni Albers. "She linked this to the question to what extent today the new interest in the Andean handicraft tradition among young Colombian designers ties in with the dialogue Anni Albers had in the 1940s and 1950s. So what can one learn from Andean craft traditions in modern life?"

The fascination with Bauhaus 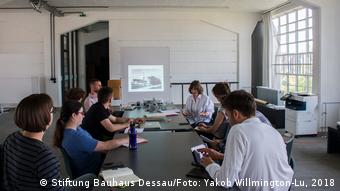 The opening of the Bauhaus lab on Ludwig Konrad Wachsmann

Eci Isbilen specializes in standardized building systems and mass production. She is writing her doctoral thesis on the architect Konrad Ludwig Wachsmann, who in the 1940s and 1950s, together with Walter Gropius, advanced the industrialization of construction in the United States.

Wachsmann developed a universal building system with industrially prefabricated components. Its construction was the subject of the LAB 2018 in Dessau. "It's worthwhile being here because Wachsmann can't just be seen as an American phenomenon," said Isbilen. "It's one of those stories that started here, crossed the Atlantic and then came back again. Changing places helps change perspectives."

The fact that the Bauhaus school's ideas and products are currently back in high demand is not only due to the centennial in 2019, said academy director Bittner. It is the realization that in a globalized world we have to deal differently with natural resources and can no longer continue to consume and produce as before. "Such a crisis already occurred in the 1920s," said Bittner. "At that time, the Bauhaus designers were looking for solutions on how to live in a present that was altered by industrialization and how to shape it in a humane way."

The optimism with which the Bauhaus pioneers attempted to shape their present in an agreeable way has become a model for us today, she added. That's why, Bittner said, people are looking back at Bauhaus with a fresh view.