The outgoing German president has stressed a commitment to the Baltics amid concerns over Russian territorial ambitions. His likely successor, Frank-Walter Steinmeier, has been more restrained in criticizing Moscow. 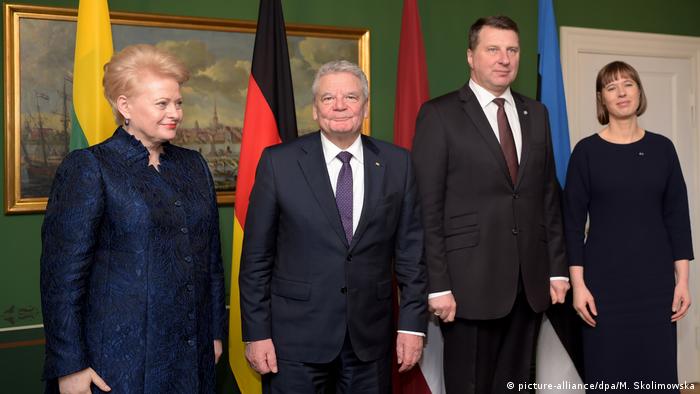 It was his 101st - and last - state visit as German president, but during Thursday's trip to Latvia, Joachim Gauck spoke as forcefully as ever about Germany's unwavering alliances.

Meeting with the heads of state from Lithuania, Latvia and Estonia in Riga, Gauck admitted that the choice of destination for his final visit as president was "symbolic."

"It sends a conscious political signal that Germany stands at the side of our Baltic partners," Gauck said.

"The change in the security situation has illustrated the urgency of this," he added, referring to fears of Russia's possible territorial ambitions in the Baltic region.

The Baltic states were all once parts of the former Soviet Union but today find themselves aligned westwards as members of the EU and NATO.

Since Russia's annexation of the Ukrainian peninsula of Crimea, all three states have vocally decried the threat Moscow poses on their doorstep.

Moscow has denied any military ambitions in the region, instead accusing NATO of trying to encircle Russia. However, last year Moscow deployed nuclear-capable Iskander missiles in its heavily militarized enclave of Kaliningrad, which borders Lithuania and Poland. Beloved in the Baltics

Thursday's visit to the Latvian capital marked the final state visit of Gauck's five years as German president. Gauck is reportedly held in very high regard in the  region, having often stressed Germany's commitment to its eastern NATO partners. On Thursday, he once again emphasized that pledge, saying: "Germany stands alongside our Baltic partners and friends."

Gauck's commitment to NATO and the Baltic states comes at a testing time for the alliance. Baltic countries and other eastern European NATO allies, such as Poland, have expressed unease over comments made by US President Donald Trump, who called alliance "obsolete" during his presidential campaign.

Under pressure from Western leaders, Trump has since toned down his words, saying that NATO is "of fundamental importance" to the transatlantic relationship.