German lawmakers in Chancellor Angela Merkel's ruling conservative party are questioning whether Russia should be stripped of the 2018 FIFA World Cup. The debate follows the downing of an airliner in east Ukraine. 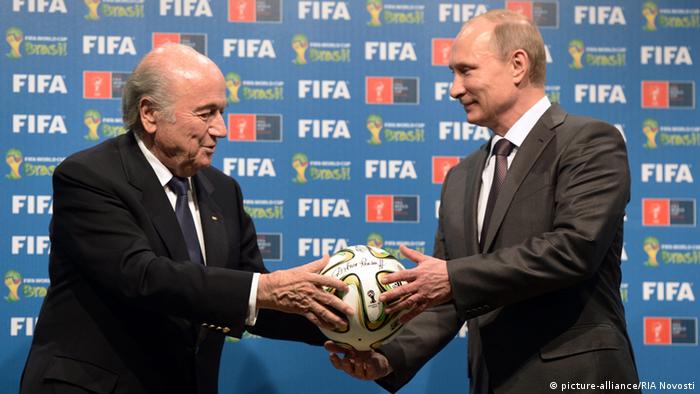 On Wednesday, parliamentarians in Germany openly questioned Russia's suitability to host the upcoming World Cup in the wake of increasingly tense international relations.

The United States and its European allies have blamed pro-Russia separatists for the July 17 downing of Malaysia Airlines flight MH17, which killed 298 people. Some international leaders say the surface-to-air missile that is believed to have shot the plane out of the air was provided by Russia.

This week, the European Union threatened to impose tougher sanctions on Russia, but ministers have delayed action for several days.

Michael Fuchs, the deputy head of the parliamentary bloc of Merkel's Christian Democrats, said that stripping Russia of the World Cup could have a stronger impact than tightening sanctions. Implementing sanctions, he added, would be difficult owing to Russia's borders, which are too vast to effectively seal off imports.

"The FIFA football association should think about whether Moscow is an appropriate host if it can't even guarantee safe airways," Fuchs said, adding that Germany or France could take over the tournament if needed.

"If [Russian President Vladimir] Putin doesn't actively cooperate on clearing up the plane crash, the football World Cup in Russia in 2018 is unimaginable," Peter Beuth told the mass-circulation Bild newspaper.

Stephan Mayer, of the CDU's Bavarian sister party, the CSU, echoed Beuth's sentiment, saying taking the World Cup away from Russia "should not be a taboo."

The head of Merkel's junior coalition partners, the center-left Social Democrats, said it was wrong to already be discussing the future of a tournament that won't take place until 2018.

"I don't think its especially smart to have a debate now, four years ahead of the next World Cup," Sigmar Gabriel, who also serves as Germany's economics minister, told the DPA news agency.

No decision from the Dutch

The Netherlands was the home country of two-thirds of the flight's passengers, but its football association said it was too early to review whether Russia should be stripped of the tournament.

"The Dutch football association is aware that a future World Cup in Russia stirs great emotion among all football lovers and the next of kin in the Netherlands," the KNVB announced in a statement.

"Standing still to remember our enormous loss is now the priority," the statement continued. "The association believes it is more appropriate to conduct a discussion over a future World Cup in Russia at a later moment, once the investigation into the disaster has been completed."

Though Russia will not host the World Cup until 2018, it will host the Confederations Cup one year earlier. The tournament, viewed as a warm-up of sorts for World Cup host countries, will be held in Moscow, St. Petersburg, Kazan and Sochi. As reigning World Cup champions, Germany will participate.