German politicians fret about refugees from Afghanistan  | Germany | News and in-depth reporting from Berlin and beyond | DW | 17.08.2021 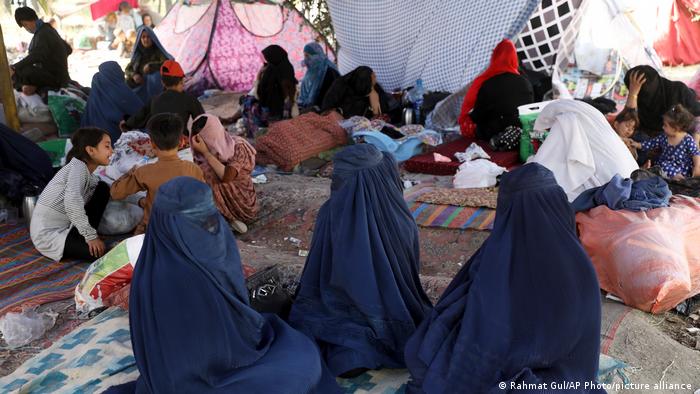 Large numbers of Afghans have fled the approaching Taliban

Before Chancellor Angela Merkel said anything about the dramatic events in Afghanistan, many of her colleagues were already turning their attention to what the Taliban's return to power there might mean on the ground here in Germany.

"The mistakes regarding the Syrian civil war must not be made again," Armin Laschet, the chancellor candidate for the center-right CDU/CSU in September's general elections, tweeted as the Taliban took Kabul on Sunday. "2015 shall not be repeated."

Laschet, the leader of Merkel's Christian Democrats (CDU), was referring to the more than 1 million people who fled war-ravaged countries and found their way to European borders in 2015. Syrians were the largest contingent, and many of them settled in Germany after Merkel's famous "Wir schaffen das!" (we can do this) comment saw borders remaining open.

Those events left a lasting impact on German politics as the country has struggled with issues of immigration and integration. For decades, it has been a top destination for asylum-seekers.

Despite the initial warm welcome in 2015, anti-migrant sentiment helped turn the far-right party Alternative for Germany (AfD) into a political force nationwide. Following general elections in 2017, it became the largest opposition party in the Bundestag, the German parliament.

Laschet's position, which he reiterated at a news conference on Monday, was echoed by some of his conservative party colleagues. The AfD's parliamentary leader, Alice Weidel, picked up the line, as well.

"2015 must not be allowed to repeat itself," she wrote on Twitter on Monday. "Genuine refugees must be helped in their home region if possible."

"We most of all need to help neighboring states, should Afghan refugees come," Merkel said on Monday evening, during a news conference about the dire turn of events in Afghanistan.

Her deputy, Olaf Scholz, who is running as the chancellor candidate for the Social Democrats (SPD), told his audience at a campaign event on Monday that Turkey, Pakistan, Iran and Iraq could serve as places for refugee settlement.

Any refugee response comes less than one week after Germany and other European countries stopped deportations to Afghanistan and after months of the German government dragging its feet to resettle thousands of Afghans who put their lives at risk working for the German military and other agencies. Many of them remain in Afghanistan, fates uncertain.

"It's a moral failure of the German government not to have looked after the local employees," Alexander Graf Lambsdorff, a lawmaker with the pro-free market Free Democrats (FDP), told DW. "On the other hand, as Europe and as Germany, we do not have an obligation to take in all the refugees."

Annalena Baerbock, the chancellor candidate for the more pro-refugee Greens, appealed to Western nations. Rather than wait for all 27 members of the European Union to find agreement, she told public broadcaster DLF it would be "enough to work with the European countries that want to, and especially the Americans and Canadians."

With the outcome of next month's elections far from clear, any issue could tip the balance that decides which parties constitute Germany's next federal government. Migration has made fewer headlines in the past few years, but it remains a top voter issue, according to a survey from the Allensbach Institute in May. Events in Afghanistan raise the possibility of it coming to the fore in the final weeks of campaigning. 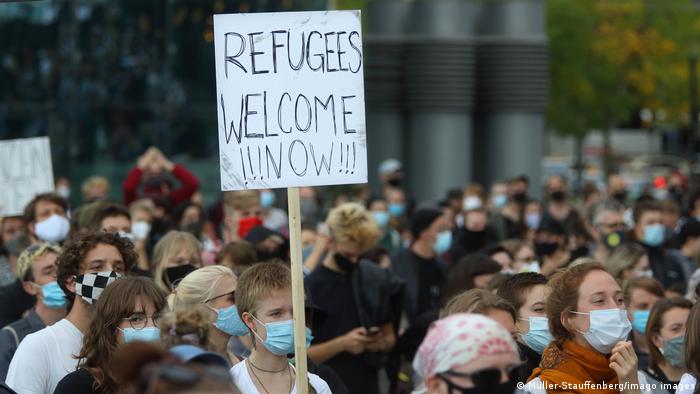 "Instead of spreading fear and panic, and conjuring up a refugee wave, Germany — as one of the richest countries in the world — should lead by example by taking in refugees from Afghanistan and giving them a chance to stay," Lotta Schwedler, a spokeswoman for the Refugee Council of Brandenburg, told DW in a statement.

The only "mistake" from 2015 to avoid, she added, is housing refugees in "inhumane conditions" for months on end.

Afghans were the biggest group of asylum-seekers after Syrians in the 2015 wave, which has often been framed as a one-off humanitarian emergency. The EU struggled in the years since to find a common policy on refugee distribution and settlement across the bloc.

A multibillion-euro deal with Turkey has all but guaranteed that the country holds on to its refugee populations. Logistical support for Libya and other North African countries helps keep people there — and sometimes haul them back — despite abuses documented by human rights groups. The EU's border agency, Frontex, has seen its budget grow every year; the bloc's external borders, and those of its neighbors, are more tightly guarded.

"It's appalling that the first reaction to the suffering and atrocities we can, unfortunately, expect again in Afghanistan is isolation — that the main thing is that people don't come to us," Wiebke Judith, a legal policy adviser for Pro Asyl, a German refugee aid organization, told DW.

The mistake in 2015, she added, was the lack of solidarity within the EU.

Afghanistan is much farther from Europe than Syria, and people fleeing conflict rarely show up immediately, if at all. Many of those who arrived in 2015 spent years elsewhere in their region.

Afghans have long composed one of the world's largest refugee populations, according to the UN Refugee Agency, settling mostly in Iran and Pakistan and other South Asian countries. At least 3.5 million Afghans are internally displaced, according to the Internal Displacement Monitoring Centre.

"We're not yet seeing a comparison to 2015," Judith said. "You get the feeling that such comparisons want to distract from Germany's political failure, which has become dramatically apparent."

German authorities have confirmed that a first Bundeswehr evacuation flight carried just seven people. But the Foreign Ministry said there were good reasons for that.