Police have raided, closed and banned a Muslim association and mosque in Stuttgart for supporting the "Islamic State" militant group. Several people from the region frequented the center before leaving for Syria. 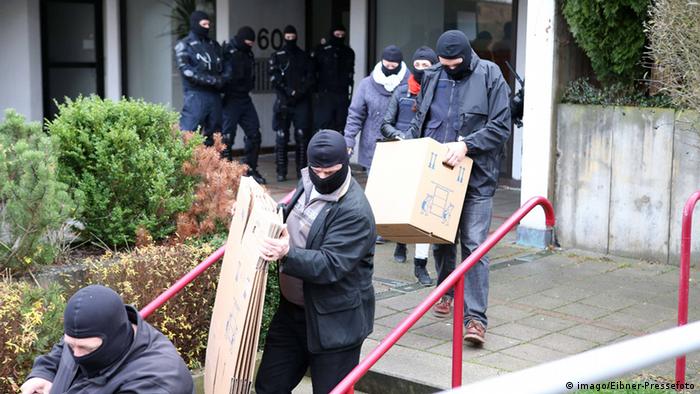 Authorities in the southwestern state of Baden-Württemberg raided and shut down a Muslim association and mosque said to have financially supported and recruited on behalf of the "Islamic State" militant group.

The head of Germany's federal intelligence agency, the Verfassungsschutz (BfV), has said that the number of conservative Muslims it calls Salafists has risen. But who are they, and are they as dangerous as he implies?

One of Germany's most prominent Islamist preachers has been arrested on the suspicion of supporting a terrorist organization in Syria. Sven Lau is known as the leader of the so-called "Sharia Police" in Wuppertal. (15.12.2015)

"We do not tolerate associations that advocate the use of violence to promote religious concerns and collect donations for terrorist goups," said Baden-Württemberg's Interior Minister Reinhold Gall.

"The association supports, in the form of the so-called 'Islamic State,' an Islamist group that carries out religiously-motivated attacks against persons and property," Gall said.

The Islamic Educational and Cultural Center Mesdschid Sahabe - located in the southwestern city of Stuttgart - was often frequented by Salafist preachers and Islamist fundamentalists from the West Balkans, the minister said.

"Through the association, donations have been collected for terrorist groups and fighters recruited for the Syrian conflict. In addition, the association and its members glorify jihad and religiously motivated terrorism," the minister added.

What does security cost us?

The economy of terrorism | DW News

At least 10 out of the 50 foreign fighters to travel to Syria from Baden-Württemberg frequented the mosque. Three of them have died fighting in Syria.

The association has now been banned and its property confiscated by authorities. Police took computers, hard drives, smartphones and other materials from the mosque, although it was unclear whether any arrests resulted from the raid.

In March, police raided the same center to gather evidence implicating the association on terrorism charges.

German authorities increased their efforts against terrorism financing and support following deadly attacks in Paris - claimed by the "Islamic State" - that left at least 130 people dead.

On Tuesday, German police arrested Sven Lau - one of Germany's most prominent Salafist preachers known as the leader of the so-called "Sharia Police" - on suspicion of supporting a terrorist organization in Syria.