Musicians have shown their disdain for the US president's plan for a border wall, staging a German-inspired protest concert on the Mexico-US frontier. Trump supporters gathered on the US side but couldn't stop the music. Artists from several countries gathered in the town of Tijuana, Mexico, which already has a border fence, to stage a concert calling for it to be torn down.

The initial plan for the #teardownthiswall concert, staged by members of Germany's Dresden Symphony Orchestra on Saturday, had been different.

Organizers had hoped to stage the musical event on either side of the metallic divide, but US authorities refused permission for the crowdfunded event on their side. They cited security concerns.

Read more: Tearing down Trump's wall before it's built - with music

Instead, a group of US President Donald Trump's supporters gathered there shouting "President Trump, build the wall for our safety!" They raised a US flag and blasted out "The Star-Spangled Banner," the US national anthem, over a loud speaker. 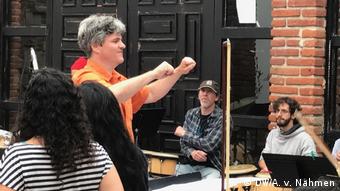 "It's weird because we tried to have a peaceful concert on both sides to build a bridge with music across the wall," the Dresden orchestra's director, Markus Rindt, told DW. "It would have been better to have music on both sides playing together to promote a better understanding, but this is freedom of speech"

The Trump supporters' message was drowned out by the sound from across the border where Mexican musicians had affixed pieces of scrap metal to the fence, playing them as percussion instruments.

That was accompanied by more conventional sounds from members of the Dresden Symphony Orchestra, with other artists from Argentina, Guatemala, Sweden and the United State also adding their contributions.

Rindt had a personal reason to get involved. He grew up in East Germany at the same time US President Ronald Reagan stood in then-West Berlin and urged the Soviet Union to "Tear down this wall."

"It is important to know that I grew up in East Germany and I have a special relationship to walls because I grew up surrounded by walls," Rindt said. "It was a difficult time, I fled the country and I was so happy the wall came down due to peaceful protest.

"To see what peaceful protest can do, then you understand that it can be a possibility for other parts of the world to come together peacefully with arts and music and have good creative ideas and try to change things. 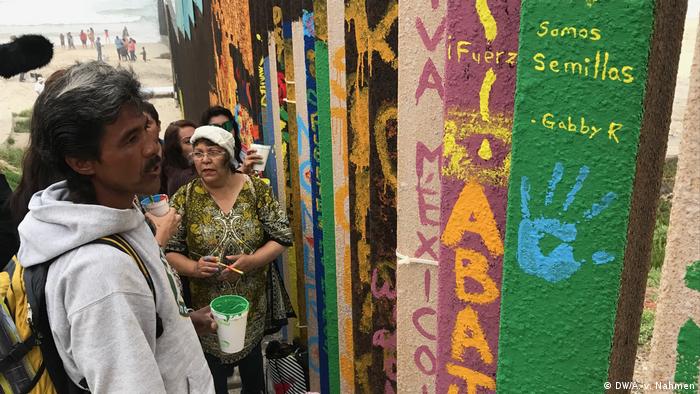 "We bring them together saying 'we are one world and walls are not the future,' we should try to solve problems another way, find other solutions," he added.

Read more: Against the Wall - Artists in Tijuana

Some painted their names - and messages to Trump - on the dividing fence mesh, which was constructed using recycled material from the Gulf War.

It's not the first time the Dresden Symphony Orchestra has dabbled with contentious issues.

Last year, the German Embassy in Istanbul canceled a  controversial performance of the Marc Sinan piece Aghet, about the Armenian genocide.

The Turkish government strongly denies that the Ottoman Empire's mass murder and deportation of some 1.5 million Armenians during World War I constitutes genocide.

Crossing borders musically: Dresdner Sinfoniker will not be silenced

Citing security concerns and environmental issues, US authorities have banned a concert along the US-Mexican border. The musical director of the project says this only fuels his ambition to stand up against nationalism. (22.05.2017)

US agents have seized 1 ton of cocaine and 7 tons of marijuana inside a secret tunnel running beneath the US-Mexico border. The 800-meter passage is the longest discovered in California to date. (21.04.2016)

Tijuana: Where the American Dream Ends