Muslim parents have lost an appeal against their nine year-old daughter having to attend mixed swimming lessons with boys. The girls can protect their modesty, however, with full-length bathing suits. 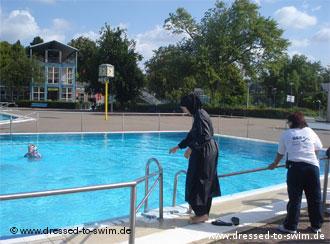 A court in the western city of Muenster has ruled that Muslim girls at elementary schools in Germany must attend mixed swimming classes with boys, rejecting a request from the parents of a nine-year-old girl for her to be excused from the lessons.

The parents from the industrial city of Gelsenkirchen told the school authorities that they lived strictly to the teachings of the Koran, adding that they found mixed swimming "immoral".

The administrative court said, however, that the girl could protect her modesty by wearing a full-length bathing suit dubbed a "burkini."

It also dismissed complaints that the bathing suit hindered swimming because of excessive absorption, endangering their daughter's life.

German teaching unions and education authorities have adamantly refused to segregate swimming classes in state schools at the request of parents, contending that mixing of sexes is a goal of education.

The tribunal refused Wednesday to issue a temporary injunction and said it would allow no further appeal.

The issue has also divided the Islamic community into conservatives and liberals who say the custom should change in Germany.

"My Book About Islam" is the first schoolbook on the Muslim faith to be approved for young children in Germany. The authors hope it will help foster understanding by dispelling myths about the followers of the Koran. (14.02.2009)

A 12-year-old Muslim schoolgirl in North-Rhine Westphalia will have to take part in co-ed swimming lessons, a court in Duesseldorf ruled on Wednesday, May 7. (08.05.2008)