Chancellor Angela Merkel has said stores, schools and day care centers will close in the run-up to Christmas. The new rules, agreed with Germany's 16 state leaders, will come into effect from Wednesday. 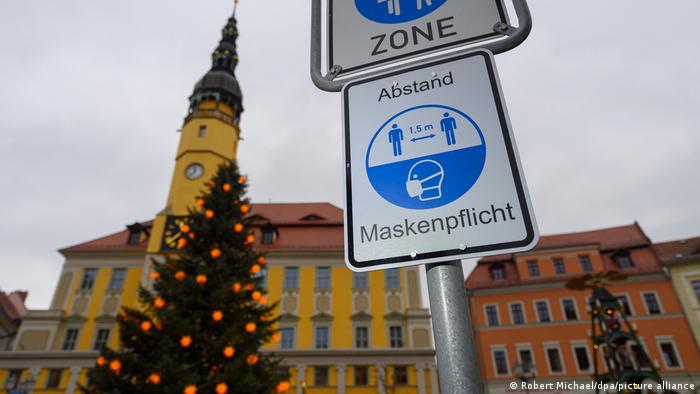 Chancellor Angela Merkel has announced that most stores in Germany will shut from Wednesday, along with schools and day care centers.

The new restrictions will be in effect until at least January 10 to help tackle the second wave of the coronavirus pandemic, which threatens to overwhelm the country's health system.

In a news conference that followed a meeting of federal and state leaders on Sunday, she said the country urgently needed to address the exponential rise in COVID-19 infections.

The decision is set to cause a major disruption for retailers, the education system and the public in the lead-up to the Christmas holidays.

What do the new restrictions consist of?

The chancellor also recommended that families who are planning to meet up should isolate for a week beforehand to be safe.

What do the new rules aim to achieve?

"The measures which we began on November 2 have not been enough," Merkel said in a statement after the meeting.

"The health system is under heavy strain and our aim has always been to avoid an overloading of the health care system," Merkel said.

The goal of the new measures is to bring down the infection rate so that authorities can carry out contact tracing once again — the high number of infections made contact tracing impossible.

An acceptable infection rate for this would be 50 cases per 100,000 residents. Although the government has agreed to impose the new measures until January 10, they may be further extended if the case numbers fail to come down.

Germany's intensive care unit capacity is also at a critical level, and doctors have warned that only 5% to 10% of intensive care beds are available in some parts of the country.

Hans Brandt, a DW reporter in Berlin, explained the relevance of the speedy decision that the government and heads of Germany's 16 states made.

"It was somewhat surprising that they agreed so quickly," Brandt said. "The whole meeting took just over an hour. We have been used to these discussions between the central government and the regional leaders dragging on for hours and hours, often with acrimonious discussions." The meeting over the new restrictions was shorter than previous meetings over coronavirus regulations had been.

Brandt described the shutting down of retail shops during the peak of Christmas shopping as "a very drastic measure."

He said the new rules did not equate to the harshest possible lockdown and people had some leeway.

"A stricter lockdown is still conceivable since there is no rule that people have to stay at home," Brandt said. "It's still only an appeal."

Brandt said Merkel had been pushing for a stricter lockdown for a while and would be satisfied with the decision.

Germany's finance minister, Olaf Scholz, who was also present at the meeting, promised financial support for businesses and individuals affected by the stricter measures.

It remains unclear how exactly the government would support businesses, Brandt said, "but we know that the volume will be somewhere between €10 and €12 billion ($12.1-14.5 billion) every month" for businesses and self-employed people who cannot work because of the restrictions.

"Companies, the self-employed and freelancers who are affected by closures from December 16, will receive financial support," according to a Twitter post by the Finance Ministry. "That means improved bridging aid — subsidies for fixed costs, better conditions and higher monthly grants up to a maximum of €500,000."

Stricter measures are a rare sign of unity from Germany's federal and state governments. But the country is in for a long, hard winter, writes DW's Marcel Fürstenau.