Germany also reported a record 23,679 new infections. The country is currently under a partial lockdown, which has failed to substantially curb the number of new cases. Follow DW for the latest. 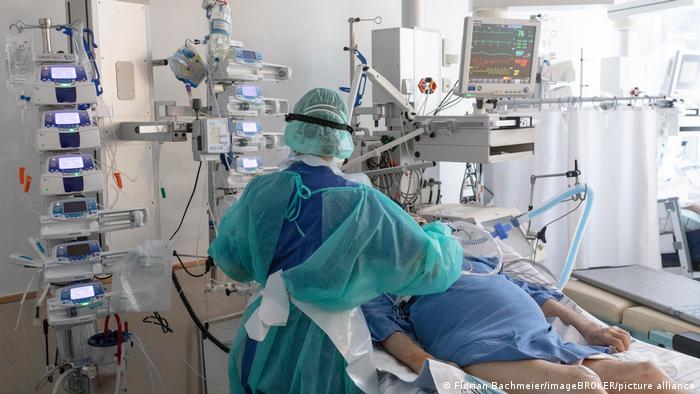 Germany surpassed 20,000 deaths on Thursday, while the number of confirmed coronavirus cases increased by a record 23,679 to 1,242,203, according to data from the Robert Koch Institute for Infectious Diseases. The previous record number of cases was reached on November 20, with 23,648 reported cases.

The reported death toll also rose by 440, bringing the total number of fatalities to 20,372 since the start of the pandemic. The previous day, a record of 590 deaths was reported. The rising number of cases and deaths comes as Germany remains under a partial lockdown, which has not substantially reduced the number of new infections.

Chancellor Angela Merkel pleaded with Germans in a speech on Wednesday to reduce contacts and take additional precautions. "If we now, just before Christmas, have too many contacts and this ends up being the last Christmas with the grandparents, then we will have failed in a sense. We should not do this," she said.

DW has an overview of the latest major developments around the world. 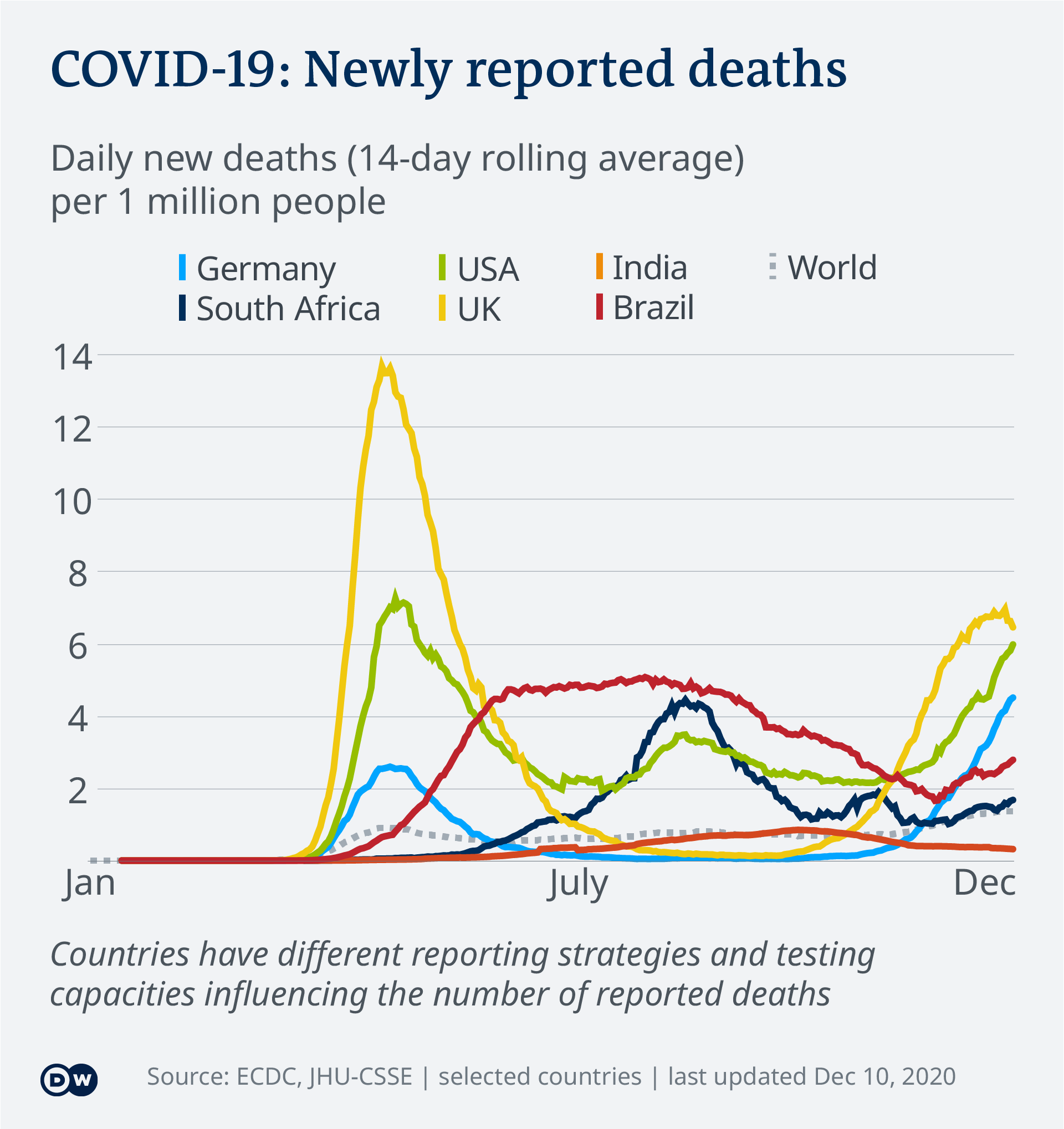 In France, the government extended certain coronavirus restrictions in a bid to curb the virus over the holidays. Museums, cinemas, theaters and football stadiums will remain closed until January — three weeks longer than planned. The country's six-week-long lockdown will end on Tuesday, although a nationwide curfew will be in place from 8 pm and 6 am. The curfew will be in effect on New Year's Eve, but not on Christmas Eve on December 24. Families will be limited to celebrations of no more than six adults per household.

The European Medicines Agency (EMA) said a recent cyberattack would not hinder its timeline to approve coronavirus vaccines. The two-week-long attack targeted documents on the BioNTech-Pfizer vaccine.

"We have been subject of a cyberattack over the last couple of weeks... I can assure you that this will not affect the timeline for the delivery of vaccines and we are fully functional," EMA chief Emer Cooke told EU lawmakers.

In Germany, people have gained about 1 kilogram (2.2 pounds) since the start of the pandemic as restrictions to slow the spread of the coronavirus keep people at home.

South Korea's health authorities on Thursday scrambled to building shipping container hospital beds so as to ease the medical facilities currently over-stretched by the latest wave of coronavirus infections. Seoul city began installing container beds for the first time since the pandemic as a resurgence of infections sparked concerns about a shortage of hospital beds.

Japan will buy 10,500 deep freezers to store COVID-19 vaccines as the country prepares for nationwide vaccination. The Japanese government has agreed to purchase 290 million doses of vaccines developed by BioNTech-Pfizer, Moderna, and Oxford-AstraZeneca.

The BioNTech-Pfizer shots need to be stored at the ultra-cold temperature of -70 degrees Celsius (-94 Fahrenheit), while Moderna's jabs require storage at -20 degrees Celsius. This poses major handling and storage challenges

Australian scientists said they had developed a rapid genome sequencing method that would cut the time taken to trace the source of coronavirus cases down to within four hours. This would help to quickly contain any future outbreaks.

UN Secretary-General Antonio Guterres on Wednesday reiterated that the new coronavirus vaccines be treated as "a global public good" made available to everyone in the world, as the preparation for vaccine inoculations began in the rich nations.

"It's true we are seeing vaccination nationalism moving at full speed," the UN chief said.

He appealed for $4.2 billion in the next two months for the COVAX program, an ambitious global vaccine project that aims to buy and deliver coronavirus vaccines for the world's poorest people. Financing COVAX, Guterres said, is the only way to guarantee vaccines will be available in Africa and other developing areas.

Coronavirus-related deaths and hospitalizations in the United States reached a new high on Wednesday with 3,054 fatalities and 106,688 hospitalizations due to COVID-19. The latest deaths are nearly 300 higher than the previous record set in May.

The country also reported a record 215,860 new infections on Tuesday, according to John Hopkins University data.

US talk show host Ellen DeGeneres announced that she has tested positive, but said she is "feeling fine."

Canada approved the BioNTech-Pfizer vaccine on Wednesday, becoming the third country after the UK and Bahrain to greenlight the COVID-19 vaccine. The initial shots will be delivered and administered starting next week, and every Canadian will be able to be inoculated by the end of September 2021.

"We will see 30,000 vaccines begin to arrive next week with many more on the horizon, but ... we've got a tough winter to get through," Prime Minister Justin Trudeau said.

Israel will start vaccinations from December 27, Prime Minister Benjamin Netanyahu announced on Wednesday. The country received its first shipment of the eight million doses of the BioNTech-Pfizer vaccine.

The vaccine has yet to receive the necessary regulatory approvals for use in Israel. "I believe in this vaccine. I expect that it will get the requisite approvals in the coming days," Netanyahu said, adding that he intended to be the first Israeli to be vaccinated.

Iran's President Hassan Rouhani said that US sanctions were making it difficult for the country to procure medical supplies from abroad, including COVID-19 vaccines to contain the worst outbreak in the region.

"Our people should know that for any action we plan to carry out for importing medicine, vaccines, and equipment, we should curse Trump a hundred times," Rouhani was quoted as saying by the state-run IRNA news agency.

South Africa has entered the second wave of the pandemic, the country's health minister declared Wednesday. "As it stands, as a country we now meet that criteria," Zweli Mkhize said as the country reported nearly 7,000 new cases over the past 24 hours.

The Munich Security Conference, which brings together the world's defense and security elite, will not take place in February 2021 as scheduled. The Germany-based conference hopes to reschedule in the spring. Click here to read the full story.

Indian authorities are considering authorizing some COVID-19 vaccines for emergency use and have prepared an initial plan to inoculate 300 million people, raising hopes of ending its health crisis. Click here to read the story.

Brexit, Christmas and the coronavirus pandemic have led to congestion problems at some of the UK's biggest ports. In turn, a lack of parts have arrived at a factory in southern England, leading to a temporary closure.

Coronavirus: Pakistan pins its hopes on a Chinese vaccine

Coronavirus cases are surging in Pakistan, as a Chinese vaccine is undergoing trials at three hospitals in the country. Islamabad has spent millions to secure doses — how much longer will Pakistanis have to wait?