A year of lockdowns and working from home appear to be taking their toll on Germans' waistlines. A new study on health in the country notes an increase in weight gain since the coronavirus pandemic began. 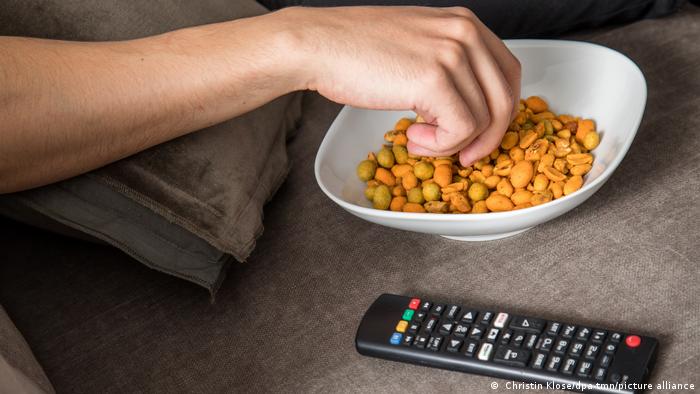 Largely shut in at home and binge-watching their favorite shows, Germans' waistlines have expanded slightly this year

Germans have gained weight since the country went into lockdown in the spring. That's according to a new study on the state of health in the country published on Wednesday by Germany's disease agency, the Robert Koch Institute (RKI).

The report outlines how measures introduced to curb the spread of the deadly coronavirus have also had negative effects on the health of the German populace.

The study found that from April to August, Germans gained an average of around 1 kilogram (2.2 pounds), citing an increase in unhealthy eating, among other changes in daily behavior as a result of pandemic-related restrictions.

Fewer visits to the doctor

The RKI also noted that fewer people visited their doctors, both general practitioners and specialists, during the first lockdown in the spring. Germans have apparently "increasingly abstained from using medical services," the study's authors wrote. German hospitals also postponed many elective procedures in order to maintain space for a potential surge in COVID-19 patients.

Some 23,000 people in Germany aged 15 and older were surveyed via telephone from April 2019 to September of this year.

The study did not confirm initial fears that the pandemic or measures to contain it would lead to a rise in psychological disorders.

"No differences were found among the general population in terms of depression symptoms or the support received and provided in the household," the studies authors said.

However, the RKI emphasized that there was "no unified picture" of the overall health situation in Germany and that further study was necessary.

There was also a decrease in the number of people smoking tobacco, but whether that is tied to the pandemic was unclear.