The lawsuit accuses top Turkish officials including President Erdogan of 'war crimes.' While largely symbolic, the lawsuit adds to a growing list of contentious issues between Turkey and Germany. 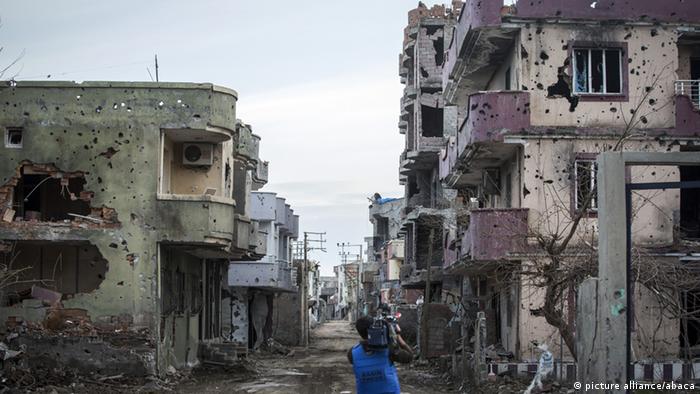 A group of German lawmakers and rights activists on Monday filed a civil lawsuit against Turkish President Recep Tayyip Erdogan for alleged "war crimes" committed in ongoing military operations in the Kurdish populated southeast of the country.

Lawyers Britta Eder and Petra Dervishaj filed the more than 200-page document with Federal prosecutors in Berlin as "an ethical obligation to bring charges here in Germany against Turkey for war crimes." The complaint also mentions former prime minister Ahmet Davutoglu and other top officials from the government, military and police.

The accusations echo those of Turkey's Kurdish opposition and human rights groups, which have documented widespread abuses during months of counter-terror operations in southeast Turkey.

Since a peace process and ceasefire broke down last year, several thousand soldiers and Kurdish militants have been killed, as well as more than 300 civilians caught between the warring parties.

In response to Kurdistan Workers' Party (PKK) militants occupying urban areas in the southeast, Turkish security forces used heavy handed tactics - including tanks and artillery - and open ended curfews to root out the rebels. More than 1.5 million people were impacted by the curfews, according to the Turkish Human Rights Foundation. 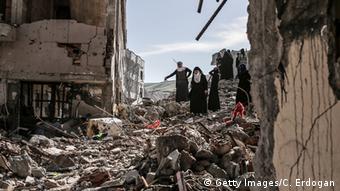 More than 6,000 buildings across the southeast have been destroyed in fighting, according to the government.

Ulla Jelpke, an MP from Germany's Left Party, said it was important to increase awareness among the public and government so that "in the future there will be much stronger and clearer protests against the actions of a NATO member against the Kurds and opposition."

The lawsuit centers largely on events in Cizre, one of several urban areas in the Kurdish southeast that was heavily damaged and made to look like scenes from neighboring Syria.

According to the complaint, in the first half of September last year 21 people were killed. Many were shot by security forces near their homes during a state of emergency in the city.

In another allegation, 178 people were killed between December 2015 and March 2016. The 178 deaths occurred during what has come to be known as the "basement massacre," when Turkish security forces stormed three residential basements where civilians were hiding. The security forces are alleged to have set fire to the crowded basements, or shot and killed civilians before torching the corpses.

The Turkish government has refrained from investigating the massacres and vowed to continue to fight terrorism. Human rights organizations and the UN have called for investigations into collective punishment, destruction of property, torture, arbitrary arrest and killings.

The lawsuit comes a week after the Turkish parliament passed a law giving military officers immunity from prosecution for any human rights abuses committed during counter-terror operations.

While in many ways symbolic, the lawsuit adds to growing list of contentious issues between Berlin and Ankara at a time Chancellor Angela Merkel is relying on Turkey to implement a migration deal with the EU.

Merkel faces increasing criticism at home for not taking a harder stance on Turkey over a crackdown on the press, human rights abuses and deterioration of democracy in the country. A German parliament Armenian genocide resolution passed earlier this month is also testing relations.

Turkey has agreed to allow German Defense Minister Ursula von der Leyen to travel to the Incirlik air base in Turkey to meet German troops there. Ankara had earlier barred a German delegation from making the same trip. (27.06.2016)