Following the lead of the Belgian parliament, a German lawmaker says full-body veils, or burqas, worn by Muslim women should be banned across Europe because they rob women of their personalities. 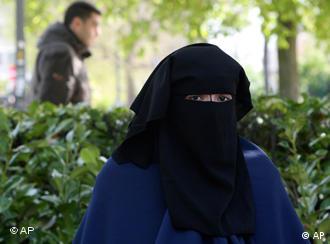 The debate over the burqa has been reignited in Europe

Silvana Koch-Mehrin, a member of Germany's pro-business Free Democrats and a vice-president of the European Parliament, has called for a complete ban on the Islamic full-body covering in an interview with the German Bild am Sonntag newspaper.

In her editorial, Koch-Mehrin said that the full veil "openly supports values that we do not share in Europe."

Koch-Mehrin said personal and religious freedom should be defended, but should not "go so far as to take away a person's face in public."

"The burqa is a massive attack on the rights of women. It is a mobile prison," she wrote.

Koch-Mehrin also wrote that coming across veiled women in the street irritated her because she could not judge who they were or what their intentions were. 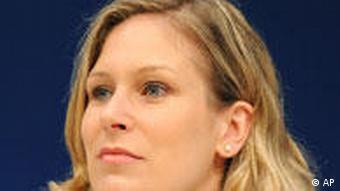 The burqa is an attack on women's rights, says Koch-Mehrin

The German lawmaker's comments come just two days after the Belgian parliament voted unanimously, as the first country in Europe, to ban the public wearing of veils that entirely cover the face. The Belgian law, which must still be approved by the upper house of parliament, calls for fines of 250 euros and up to a week in jail.

Some of the 16 federal states in Germany have already imposed bans on the wearing of headscarves by public school teachers.

The Belgian move has reignited the European debate on how to deal with Muslim veils.

The French government has proposed jailing and fining anyone who forces women to wear a full-face veil, as well as fining the wearer. President Nicolas Sarkozy wants to slap one-year prison terms and fines of 15,000 euros ($20,000) on those who make others wear them.

Man accused of polygamy in France fights back

A French muslim man has rejected accusations by the French government that he has four wives, insisting that he has only one wife and several mistresses. (26.04.2010)