Although it's only August, children in Germany have already consumed their recommended amount of sugar for the year, a consumer organization says. They blame companies for marketing sugar-packed food to kids. 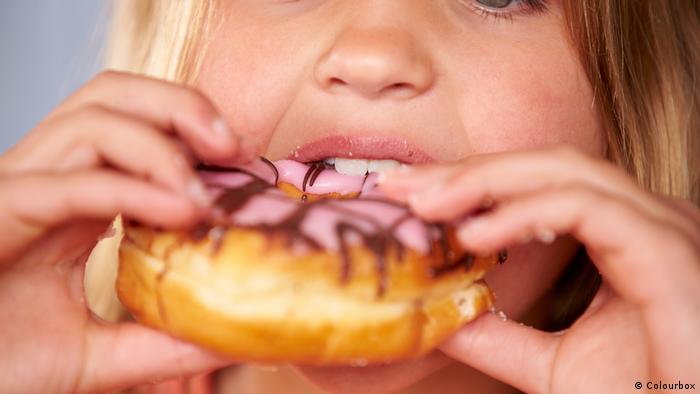 Children in Germany are eating more and more sugary foods, and have quickly exceeded the yearly amount recommended by nutrition experts, the Berlin-based group Foodwatch said on Monday.

The consumer advocacy organization named August 12 "Sugar Overshoot Day," after calculating how much sugar kids in Germany consume and comparing it to guidelines issued by the World Health Organization, the German Nutrition Society and the German Diabetes Society.

The data stems from a 2016 study in Dortmund that analyzed the nutritional habits of 1,000 children in Germany aged between 3 and 18. The study found that kids were consuming 63% more sugar than what was recommended.

Foodwatch said that the food industry shoulders much of the blame for perpetuating the issue and has urged the German government to step in.

The problem is that the food industry "almost exclusively market sweets, over-sugared drinks and other junk food to children without restrictions," he criticized.

The organization called on German Food and Agriculture Minister Julia Klöckner to implement advertising restrictions so that only nutritionally-balanced foods can be marketed to kids.

In order to combat obesity, Klöckner has been pushing for food companies to reduce sugar levels in their products, and has voiced support for a ban on added sugars and sweeteners in drinks for babies and toddlers.

Last year, the German government reached an agreement with food producers to reduce sugar, fat and salt in many products, including frozen pizzas and children's breakfast cereals. The products will be swapped out for new, more nutritious recipes by 2025.

Foodwatch has criticized the measures, saying they don't go far enough to address the problem.

German researchers say food prices must rise substantially to take account of the environmental cost of industrial agriculture. Although discount supermarkets take the blame, they cater to consumers' cheap tastes. (13.06.2017)

Study: Child obesity rates in Germany high, but not increasing

A top German health body has released a report on children’s health. Obesity, smoking and psychological issues all remain problems. (15.03.2018)