The journalist and translator, who was on remand in Turkey on terror-related charges, has flown home with her three-year-old son. Although a Turkish court lifted her travel ban, she still faces trial in October. 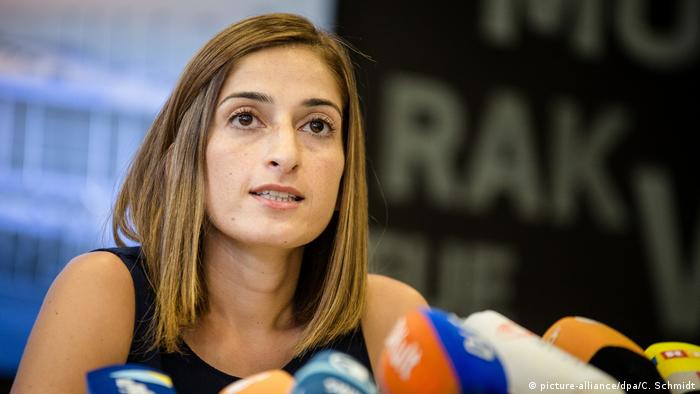 German-Turkish journalist and translator Mesale Tolu flew into Stuttgart airport on Sunday, just days after it was made public that a Turkish court had approved a request for her to leave the country.

Tolu arrived back in Germany with her nearly four-year-old son, having tweeted from Istanbul airport earlier that "After 17 months, (I'm) heading home."

Speaking at a press conference shortly after arriving in Germany, Tolu told reporters that she had mixed feelings about returning to Germany because hundreds of fellow reporters, opposition supporters, lawyers and students are still jailed in Turkey.

"That's why I'm not really happy about leaving, because I know that nothing has changed in the country where I was imprisoned," Tolu said. She added that she will continue fighting for people who have been jailed in Turkey on political grounds.

When asked if she knew why her request to leave Turkey had been approved now, Tolu said she wasn't aware of any diplomatic deals to lift her travel ban.

The 33-year-old journalist, who works for the leftist Ektin news agency (ETHA) was arrested in May 2017 on terror-related charges.

Although she was freed from remand in December, she was barred from leaving Turkey and ordered to report to authorities at regular intervals.

Tolu has been charged with engaging in terrorist propaganda and being a member of a banned left-wing group, the Marxist-Leninist Communist Party. She rejects the accusations, which could lead to a 15-year jail sentence if proven.

Her husband, Suat Corlu, who along with 16 other defendants is facing similar charges, has been ordered to remain in Turkey.

The next hearing in Tolu's trial is on October 16, according to her father, Ali Riza Tolu.

He said that his daughter would definitely travel to Turkey again, provided she is allowed to enter.

Tolu's case has been one of several that have soured German-Turkish relations over the past three years.

In February, an Istanbul court ordered the conditional release of German journalist Deniz Yücel after receiving an indictment from prosecutors seeking a prison sentence of up to 18 years.

German Foreign Minister Heiko Maas said last week that at least seven other Germans are being detained "for reasons that are politically motivated and incomprehensible to us."

The two countries were also at loggerheads after German MPs were refused access to the Incirlik airbase, where Germany's military was part of the US-led fightback against the "Islamic State" (IS) group.

Even though Turkey now faces a currency crisis that threatens to derail the economy, Berlin has made clear its desire to see an economically stable and prosperous country.

Erdogan is scheduled to make a state visit to Berlin on September 28.

Journalist and activist Suat Corlu, husband of German journalist Mesale Tolu, has been arrested again in Turkey, along with at least five others. Tolu and Corlu had been released from jail just weeks ago. (19.01.2018)