A heavily edited star interview in a German lifestyle magazine raised questions about the common practice of quote authorization, and the thinning line between journalism and PR. 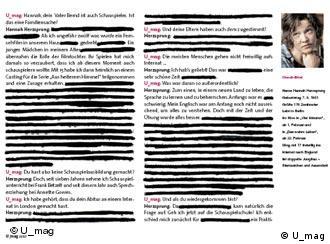 You don't say: After the interview, Herzsprung decided to take back her words

When it comes to the fight for journalistic integrity, decisive battles are not often played out on the field of the celebrity interview.

But recent events led a German pop culture and lifestyle magazine to take a stand on what has become a standard practice in the German press: allowing a subject a chance to "authorize" -- and often revise -- an interview before it appears in print.

For the February issue of youth and lifestyle glossy U_mag, writer Volker Sievert sat down to chat with up-and-coming starlet Hannah Herzsprung. But after providing the actress with the agreed-upon transcript of the interview, he said he was "shocked and stunned" when her final version came back.

So much of the text had been excised that it looked more like it had been attacked by wartime censors than simply vetted for errors or slips of the tongue. 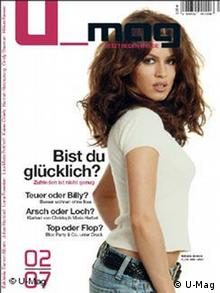 "I really felt like I had been censored," Sievert wrote in an e-mail. "I couldn't understand this massive interference in the least."

As a result of Herzsprung's changes, Sievert wrote, the interview was "almost grotesquely disfigured." The end result is "something that resembles a self-promotional text more than a lively, vital interview," he added.

"We felt used," Sievert said. "We decided to print the interview with the crossed out sections, to give our readers a look into the modern media landscape."

The event caused a stir in the German media and awoke a sleeping discussion on what some say is an overly-cozy relationship between the German press and public figures.

"Journalists are not legally required to have interview partners authorize their statements. … But unfortunately in Germany, that has almost become common practice," said Hendrik Zörner, spokesman for the German Journalists' Association (DJV). 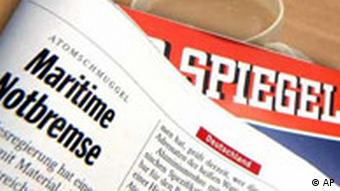 Big-name papers tend to "follow clearer journalistic practices," while the smaller, local outlets that make up the majority of papers in the country, "might have to deal with certain interview partners more frequently," and so are more likely to allow sources to sign off on interviews, Zörner said.

"This leads to the practice that looks a little like mutual back-scratching," he added.

But Ingrid Kolb, director of the Henri Nannen School for Journalism in Hamburg, said some of the country's biggest media outlets -- for instance, renowned news magazines Der Spiegel and Stern -- are noted for the practice.

"The long interviews that Der Spiegel publishes with famous public figures, their so-called talks, are known for this," Kolb said. "They can go back and forth a dozen times, with each side bringing their argument a bit more to the point, refining it, improving it. In a best-case scenario, it serves the interests of both sides."

If anything, the controversy certainly makes plain the mutual give-and-take relationship between public figures and the media: the one side in need of a platform to promote themselves and their ideas, the other constantly looking for interesting material to fill an ever expanding news hole.

Still, in the US, Britain or Australia, the idea of a journalist giving an interview subject a whack at editing his or her own comments after the fact would be grounds for derision, if not dismissal. 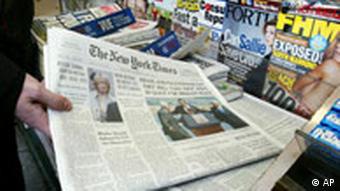 In the US, anything said "on the record" goes in the paper

"I'm aware that there is a big difference on this subject between the Anglo-Saxon world and the German world," Kolb said. "But in Germany it has become a custom to get a longer interview or quotes authorized. … In general the interview partner tells the journalist that he expects it."

According to Kolb, printing an interview with the blacked out parts shown, like U_mag did, is "essentially a scorched-earth kind of act. This person will never have something to do with the publication again."

According to the journalists' association's Zörner, the practice represents "a real weakness in German journalism; journalists are much too ready to allow interview authorization."

"Interviews are meant to serve an informative and explanatory function. But if interviews are changed after the fact, they are no longer interviews. They are PR texts," he said.

The Hannah Herzsprung case isn't the first time the issue of journalistic integrity has made headlines here. The last time was in 2003, when the press went on the attack against the government's supposed "control mania."

Back then, a group of the country's heavyweight newspapers, including the Frankfurter Allgemeine Zeitung, Die Welt, Süddeutsche Zeitung and the Financial Times Deutschland, all printed commentaries and articles deploring the practice of interview approval.

Most memorable was the move by leftist newspaper tageszeitung. In an apparent bid to point up the notion that newsmakers need the press just as much as the press needs them, the paper printed a censored interview with the then secretary general of the Social Democrats -- with all his responses blacked out in protest.

'No danger to democracy'

Germany's fourth estate has other, worse weaknesses, DJV's Zörner notes. A recent report by Reporters Without Borders ranked the country a low 23nd in terms of press freedoms, based mostly on controversial government searches of newspaper offices.

But "despite all the problems and dangers," Zörner said, overall, German journalism is "qualitatively very good."

"You can't say that (the practice of allowing interview revisions) poses a danger to democracy," he said. And after all, he pointed out, interviews are not the only tool reporters have.

"There are reports, opinion pieces -- there are many other forms of journalism available."

German intelligence officials kept tabs on the professional and private lives of journalists in a widening scandal as the agency celebrates its 50th year. (12.05.2006)

Two journalists were charged with exposing German state secrets on al Qaeda's frontman in Iraq, Abu Musab al-Zarqawi, in a case their defenders called a blow to press freedom. (16.03.2006)