Two Journalists Charged in Germany Over Secret Zarqawi Report | Germany| News and in-depth reporting from Berlin and beyond | DW | 16.03.2006

Two journalists were charged with exposing German state secrets on al Qaeda's frontman in Iraq, Abu Musab al-Zarqawi, in a case their defenders called a blow to press freedom. 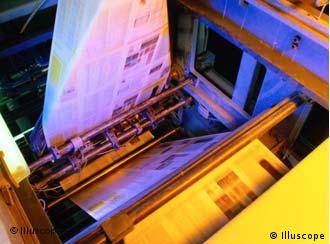 The case has raised further concerns in Germany regarding press freedom

Prosecutors in the city of Potsdam, near Berlin, said on Wednesday they were pursuing a case against German reporter Bruno Schirra and the foreign editor of Swiss newspaper Sonntagsblick, Johannes von Dohnanyi, over an article for the German political monthly Cicero in April 2005.

Authorities believe Dohnanyi obtained a classified report produced by the German federal police (BKA) and passed it on to Schirra, who quoted it in a story alleging links between Zarqawi and Iran.

In an investigation of the leak at the BKA, prosecutors raided the offices of Cicero in Potsdam and Schirra's Berlin apartment and seized files and computers disks, in a move sharply criticized by journalist groups.

The spokesman for the German Journalists' Association, Hendrik Zoerner, told the AFP news agency that the charges brought Wednesday were "superfluous and damage press freedom" and would have a chilling effect on investigative reporting.

Investigations concerning Cicero editor-in-chief Wolfram Weimer's role in the case were recently dropped after Weimar agreed to pay a 1,000 euro ($1,200) fine. However, he claims the agreement does not translate into an admission of guilt. "I wanted to shorten the process and just concentrate on letting the court in Karlsruhe decide what a scandal the whole matter is," said Weimar. Cicero has filed a complaint against the raids with the country's highest court.

The interior minister at the time of the raid, Otto Schily, was forced to appear before a parliamentary committee last October to explain his order to carry out the searches.

Protests in the Muslim world continued on Thursday, as many editors and leaders in the region denounced European newspapers for reprinting cartoons depicting the prophet Mohammed. In Germany, press freedom was stressed. (Feb. 3, 2006)

The case of the two journalists charged for exposing state secrets has raised questions about press freedom. DW-WORLD spoke with Hendrik Zörner of the German Journalists' Association about the issue. (March 16, 2006)

On Feb. 9, Ernst Zündel, a Holocaust denier, faces a German court on charges of inciting racial hatred and defaming the dead. The case shows that while Germany guarantees freedom of expression, there are limits. (Feb. 21, 2006)