German Islamic teacher's license revoked for being too liberal

Abdel-Hakim Ourghi has written books including "You Don't Have to Wear a Headscarf" and "Reform Islam: 40 Theses." His application to train other Islamic teachers was turned down for vague reasons. 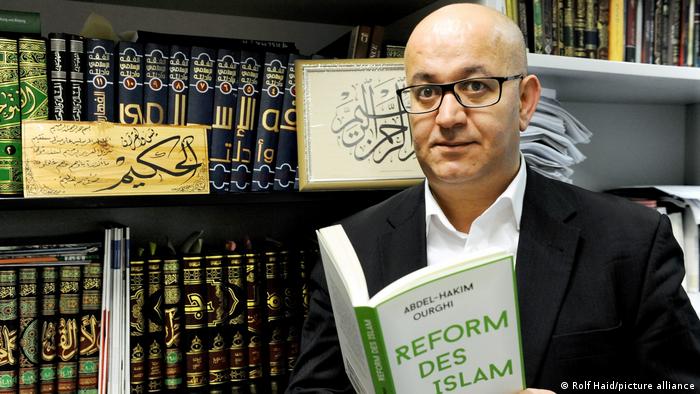 A German Islamic scholar has had his teaching license rejected because of his "liberal theological convictions," one of his peers told a newspaper on Saturday.

Islam expert Susanne Schröter spoke out in support of Abdel-Hakim Ourghi, who headed the Islamic Theology department at the University of Freiburg for nearly a decade.

Last month, the 53-year-old Ourghi had his "ijaza" (license to train Islamic teachers) denied by the Stiftung Sunnitischer Schulrat (Sunni School Board Foundation), based in Stuttgart.

The foundation was set up in 2019 with the responsibility for the teaching of Islam in the southwestern German state of Baden-Württemberg.

The decision sparked accusations that the application process was being used to intimidate theology professors with liberal beliefs.

"Mr. Ourghi has a doctorate in Islamic theology and has been teaching Islamic religious education for years," Schröter told the tabloid Bild. "The assumption that he is technically unsuitable therefore has no basis whatsoever."

It is therefore clear that “the lecturer was removed from the university because of his liberal theological convictions,” she added.

A proponent of 'liberal Islam'

Ourghi touts a liberal form of Islam, which conflicts with the views of many conservative practitioners.

For example, he has published a book of theses for peaceful and gender-equitable religious practice, and warned future religion teachers in his seminars against political Islam and what he called the "outdated views of conservative scholars."

His books include You Don't Have to Wear a Headscarf and Reform Islam: 40 Theses.

"Because I stand up for a secular and liberal Islam, they want to get rid of me," Ourghi told Die Welt newspaper on Friday.

The foundation didn't list a specific reason for Ourghi's rejection, but said his academic achievements were "not recognized in the sense of the ijaza order."

According to the foundation regulations, university professors who train Islamic religion teachers require a teaching degree in Islamic theology or religious education or an equivalent degree.

However, Ourghi has a doctorate in Islamic theology, as degree programs in Islamic religious education in Germany have not been around for very long.

The Ministry of Education and Cultural Affairs of Baden-Württemberg still, however, defended the decision.

A spokesman for the ministry said it would be unconstitutional to take sides because the foundation is a public institution.

Ijaza as 'an instrument of power'

"The ijaza serves as an instrument of power for the foundation," Ourghi told Die Welt. "It's about a warning to my colleagues: Either you represent what we want and give up, or you are no longer allowed to teach."

At least one German politician has now leaped to his defense.

"Obviously reactionary forces are trying to get a recognized Islamic scholar out of the way," said the center-right CDU's Christoph de Vries.

"I hope that the state government will put a stop to this unfortunate hustle and bustle, defend the freedom of science and protect itself in front of Ourghi."

Ourghi's application is now subject to an appeal.

German-trained imams program has been a long time coming

After a long period of preparation, Germany's first Islamic studies college has opened. Officials are optimistic that it will help fight extremism.