German interior minister to face committee over espionage claims | Germany| News and in-depth reporting from Berlin and beyond | DW | 04.05.2015

The latest intelligence service scandal to seize German attention has turned the spotlight on Interior Minister Thomas de Maiziere. Fairly or unfairly - that is the question the country would like answered. 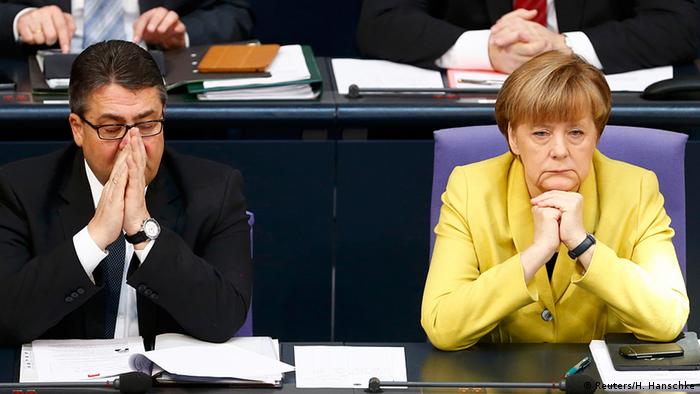 As the media wheels turn around accusations that Germany's BND intelligence service violated laws by helping the US spy on European politicians and companies, they draw a ring around one person in particular: Interior Minister Thomas de Maiziere.

Because he was chief of the Chancellery between 2005 and 2009, and therefore responsible for the BND, and is billed as a potential successor to Chancellor Angela Merkel, the accusations have sparked outrage and opposition calls for his resignation and for sanctions against those implicated.

Speaking on Monday, Sigmar Gabriel, leader of the Social Democrats and vice chancellor, said the matter was "more than one of those regular, bi-annual secret service scandals," and could "trigger a serious tremor."

De Maiziere has denied the allegations, which surfaced in Germany's Report: BND-NSA partnership went beyond metadata"Der Spiegel" news magazine last week and claim that the BND has assisted its US counterpart, the NSA, in unlawful espionage activities since 2002. He said he "follows the rules" and would be happy to provide "extensive information" about what he knows and remembers. De Maiziere and the current head of the Chancellery, Peter Altmaier, are to appear before the intelligence service supervisory committee on Wednesday.

At a news conference in Berlin on Monday, de Maiziere said he welcomed the opportunity to clear his name. He also stressed that it was in everyone's national security interests not to jeopardize the work of intelligence services and cooperation between international partners. By way of example, he cited last week's arrest of an Islamic couple in Frankfurt suspected of plotting what he said could have been a "devastating attack" at a public cycling event.

The president of Germany's Federal Office for the Protection of the Constitution, Hans-Georg Maaßen, has condemned criticism of de Maiziere and the BND, describing as "intolerable" the suggestions from some media outlets and politicians that the intelligence service had deliberately violated German law. 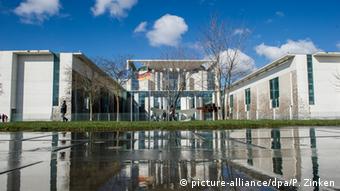 De Maizière headed the Chancellery between 2005 and 2009

But in a country which is still digesting decades of espionage at the hands of the East German Ministry for State Security (Stasi), the issue stirs emotions. Perhaps too much so, says Sylke Tempel, editor-in-chief of the German Council on Foreign Relations (DGAP) publication Internationale Politik. She said she sees the latest round of claims as a media storm over an affair in which the contours are not yet known. "I wish we could get more sense into this debate before we start asking people to resign," she told DW.

One of the main points currently being held against de Maiziere is that last month he went on record saying there were "no findings relating to alleged industrial espionage through the NSA or other US services in other states."

But according to "Der Spiegel" news magazine, at the time of that statement, the German government was already aware of "attempts by the NSA to use an existing cooperation to explore German and European companies."

Nonetheless, Tempel says it is a matter of maintaining a sense of perspective, and that the information on the table so far does not amount to industrial espionage in the classic sense.

"A much more likely scenario is that this is about weapons exports and contacts with groups under sanction," she said. "There is much hysteria but not much information."

The issue of secrecy

Making that information accessible enough to provide a fuller picture is, given its very nature, inherently difficult. But there's no doubt that this scandal has the potential to be damaging to the interior minister's political future. 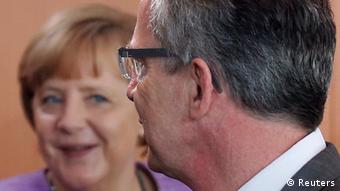 It has the scope to label him as shady and unreliable, which he can't afford, especially not if his aspirations to run for the country's top job ride on his strong work ethic. In the more immediate future however, Gero Neugebauer, German political analyst at Berlin's Free University, doesn't believe de Maiziere will be pushed out of office by these allegations.

"It is hard to say he has damaged the German people, and he will always be able to take the line that every government needs a degree of secrecy," Neugebauer said.

The more pertinent question, the analyst believes, is how strong is the opposition? "Currently too weak to be conceivable as the next government, which means it will be Merkel who ultimately decides on her interior minister's fate."

And given that he is one of her close allies, Neugebauer does not believe she would ask de Maizière to resign unless he had done something that made her look really bad.

"As long as this scandal doesn't ruin the CDU's chances of winning the next election, he stands to survive."

Chancellor Merkel has dismissed allegations that Germany's foreign intelligence agency broke the law and helped the US spy on European firms and officials. It is the first time she has publicly commented on the matter. (04.05.2015)

SPD, opposition ramp up pressure on Merkel over BND allegations

Chancellor Merkel's coalition partners are upping the pressure on her office over the latest allegations against Germany's foreign intelligence agency, the BND. An opposition leader wants her to testify under oath. (04.05.2015)