Horst Seehofer has proposed reforms to the asylum process amid allegations of corruption at the country's refugee agency. A new probe into the scandal could see the backlog of asylum applications increase. 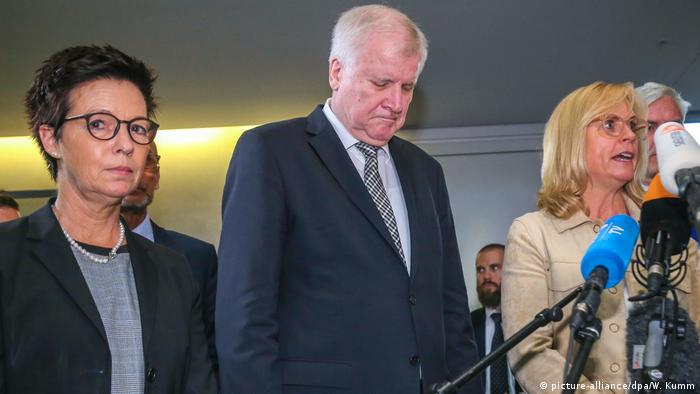 German Interior Minister Horst Seehofer on Tuesday apologized on behalf of the government for a scandal engulfing the Federal Office for Migration and Refugees (BAMF) during a closed-doors parliamentary committee hearing that lasted five hours.

Seehofer told the committee that he wanted to reform how asylum requests are processed in Germany. He has previously proposed so-called anchor centers where asylum seekers could be placed while authorities process their requests.

Prosecutors are investigating claims bribes may have been accepted to waive through asylum requests en masse.

The Interior Ministry on Tuesday announced it will review 18,000 asylum applications which had been approved at the BAMF office in Bremen.

The Bremen bureau is at the heart of the scandal for reportedly mismanaging and approving more than 1,000 asylum applications.

The new probe will involve a team of 70 people. Since BAMF will be shifting resources into the probe, it is likely that Germany will see a rise in the backlog of asylum requests.

BAMF director Jutta Cordt said pending applications are likely to rise to 80,000 cases, up from the current 50,000. Cordt told the parliamentary committee that the investigation will be transparent, saying: "Nothing will be glossed over."

"The so-called executives, and not the low-ranking employees of the federal office, must be in focus," said council chairman Rudolf Scheinost and deputy chairman Paul Müller in the open letter.

Since 2015, migration has been a hot topic in Germany. That year, German Chancellor Angela Merkel extended an open-door policy to refugees fleeing violence in their homeland, especially those from Syria.

But Merkel's policy towards asylum seekers has been met with resistance. Seehofer has criticized it, saying migration to Germany and the EU must be better managed.

At the height of the migration crisis, nearly 900,000 asylum seekers entered the country irregularly in 2015.

Nothing rattles Germans quite as much these days as immigration and asylum issues. So as Jens Thurau comments, the failures by the Federal Office for Migration and Refugees come at an unfortunate time. (23.05.2018)