Germany's interior minister has suggested the nation could send migrants back to Greece. There are over 50,000 in Greece waiting to be divided among EU states, but he said much had been done to improve the situation. 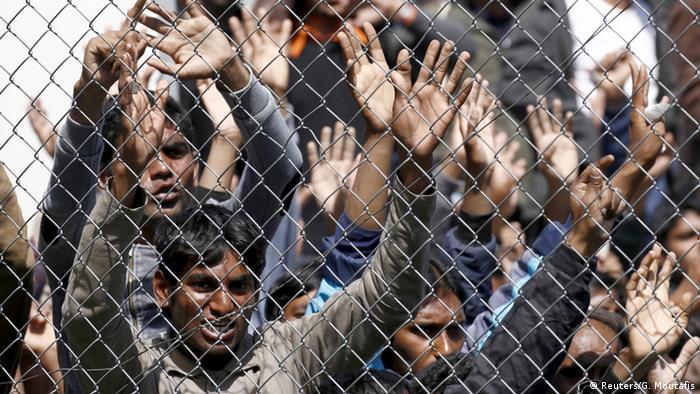 German Interior Minister Thomas de Maiziere said on Sunday that he wanted to send migrants back to Greece.

"We have done a lot in Europe in order to improve the refugee situation in Greece," de Maiziere told the "Welt am Sonntag" newspaper. "This must have consequences that will enable refugees to be sent back to Greece according to the Dublin regulations."

The EU's Dublin regulations require the member state where a person first arrived in the bloc to process the asylum application. Due to deficiencies in the Greek asylum processing system and the sheer number of people arriving in Greece, Germany has suspended deportations back to Greece since 2011.

De Maiziere said the European Union first needed to develop a common approach to refugees and Germany could not implement such a policy alone. "When we tackle this problem alone, then there is the danger that in a short amount of time the administrative courts will block deportations," he said.

The comments come a year after Germany opened its borders to some 1 million people, many of whom first arrived in the EU through Greece. Not all arrivals qualify for asylum in Germany. Processing asylum applications and deportation is a long and slow process.

There are still more than 50,000 migrants in Greece. Many have applied for asylum in Greece after their prospects of reaching northern Europe faded with the closing of the Balkan route and the EU-Turkey deal to send migrants back across the Aegean to camps in Turkey.

The refugee crisis has tested Germany's ability to integrate and provide for asylum seekers, leading to a potential public backlash ahead of next year's national elections.

“We can do this!” Merkel and the refugees