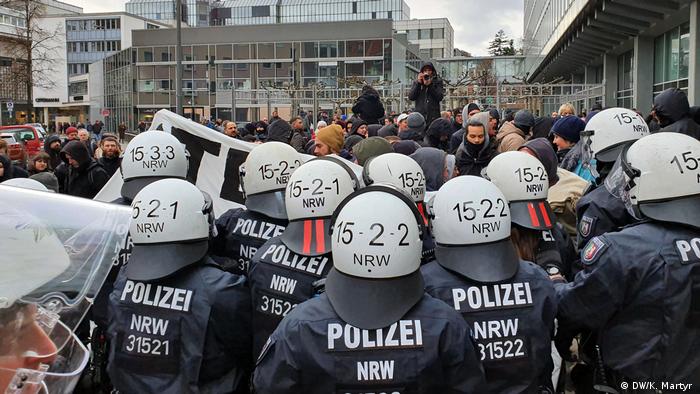 Protesters and counterprotesters demonstrated outside German regional broadcaster WDR's headquarters in Cologne on Saturday, as the viral controversy over a song about grandmas and the environment that ignited #Omagate continued to rage.

A heavy and active police presence kept apart about 30 people protesting against WDR — some of whom were members of far-right groups — and a larger crowd of mostly more youthful counterdemonstrators, with some waving banners showing allegiance to the Fridays for Future offshoots Parents for Future and Grandparents for Future.

Among the protest groups were grandparents, the intended targets of the WDR satirical song, which calls them "old environmental pigs," and later the targets of a comment by WDR journalist Danny Hollek, who suggested that grandmothers were "Nazi pigs." Hollek has since retracted his comment and apologized, but not before receiving death threats. Members of far-right groups also met in front of his home.

Grandmas were present at both the right-wing-aligned protest and the counterprotest, and their comments and opinions on the song and subsequent fallout cut to the heart of a debate over the role of state-funded media. 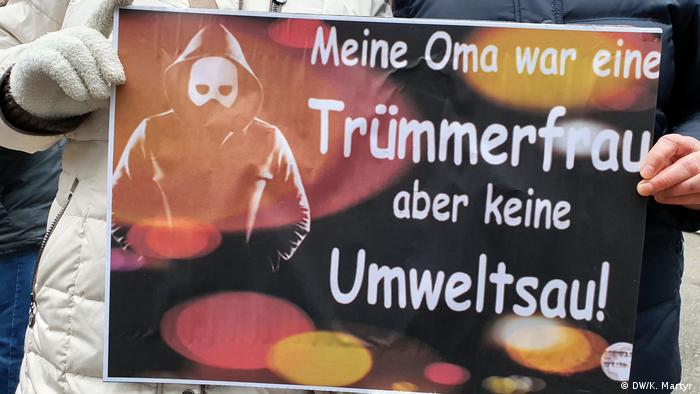 Heidrun Genutt was annoyed at being called a 'Nazi pig'

For Heidrun Genutt, a 58-year-old grandmother who has a 1-year-old grandchild, the follow-up comment from Hollek was why she joined the protest on Saturday.

Holding a sign that read "My grandma was a Trümmerfrau (rubble woman)" — a German term referring to women who were seen as the driving force to rebuild Germany after World War II — Genutt said she was protesting because she objected to the comment that anyone who disagreed with the contentious WDR song was a Nazi pig.

"We are completely normal people; we just want to carry on living a normal life and also for our children and grandchildren," she said. She added that she had originally taken offense to the song because she always separates her rubbish and she's the type of person who cuts open a toothpaste tube to use the last bit.

Yadranka, 70, agreed. "The 'grandma is a Nazi pig' comment really annoyed me," she said. "I don't want support programs like this financially."

Yadranka said that state media don't "report neutrally anymore" and said that "they don't represent the interests of the people that finance them." She thought it was important to protest "to show a sign that you've crossed a line." 'I don't need protection from' the far right

Over in the counterprotest, 67-year-old Martina, who has two grandchildren "aged 7 1/2 and 4 3/4" said: "I honestly didn't like the term 'Sau' because I'm not a pig; I'm a person. But the content of the song is completely right, and people ought to be able to express that. I find everything in the song correct except the 'pig' bit. Clearly, you need to have different opinions, but when it's against the right wing, you should only have one opinion."

And 69-year-old Christa, who is grandmother to three grandchildren aged 1 1/2, 4 and 5, said that although she wasn't particularly impressed by the song, she thought it was "ridiculous" that she might feel personally insulted by the song.

For her, the most important reason she decided to join the protest on Saturday was that she didn't like how her status as grandmother had been used by the far right. "They say we are protecting the German grandmothers — I don't need protection from them," she said. "I do that well enough myself."