German government may offer ′silence money′ for living near windmills | Germany | News and in-depth reporting from Berlin and beyond | DW | 03.01.2020

German government may offer 'silence money' for living near windmills 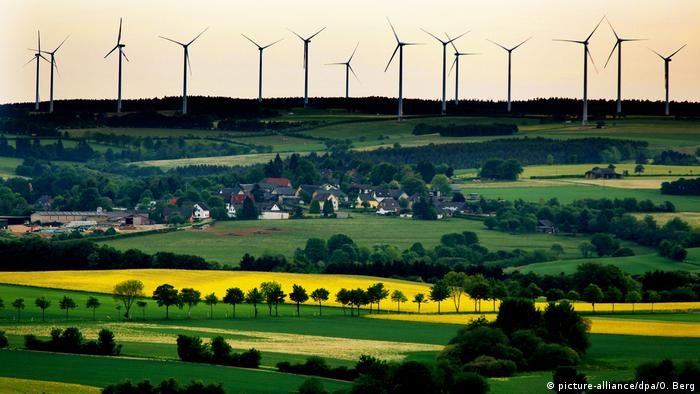 The Social Democratic Party (SPD) has proposed a new answer to people complaining about wind farms in Germany: offering money to those willing to live near them.

"Those people who accept windmills in their neighborhood, and so make the expansion of renewable energy possible, should be rewarded," SPD environment spokesman Matthias Miersch told the Neue Osnabrücker Zeitung newspaper.

The cash could be handed to local community authorities, with the stipulation that it be spent on direct benefits to citizens, though Miersch is also prepared to offer "direct financial incentives for people who live in those regions."

Wind farms are vital to the German government's energy plans, with both a transition away from coal and nuclear power currently being undertaken, though too slowly for the demands of environmentalists in the face of the ongoing climate crisis.

Despite this, local newspaper reports in Germany are filled with reports of people unhappy with having wind farms on their doorsteps, with complaints about noise "like a helicopter" (as one family told the Waldeckische Landeszeitung), and subsequent legal battles slowing down construction.

On the other hand, the Baden-Württemberg newspaper Leonberger Kreiszeitung reported on Wedndesday that the village of Weissach is seeking to turn a profit from its local wind farm by investing €435,000 ($487,000).

The center-left SPD, as junior coalition partner to Angela Merkel's conservative Christian Democratic Union (CDU), is concerned that further delays to the construction of new windmills will make its country's targets impossible to reach. Germany's official target is to draw 65% of its electricity from renewables by 2030.

But the rate of wind farm construction has slowed down, with only 160 new windmills planned until November this year: the lowest number for 20 years. "We cannot allow ourselves the long-winded planning processes we have now if we want to manage this enormous transformation," said Miersch.

Climate pioneers from the Allgäu region

Local governments aren't necessarily impressed with the idea. Uwe Brandl, president of the German Association of Towns and Municipalities, practically dismissed the payments as hush money during a press conference in Berlin on Friday.

"I think the government would be well-advised to sensitize people to the fact that they're part of this game, part of this society, and change is only possible if everyone is ready to participate in it," he added.

The idea of paying people living near wind farms has been implemented elsewhere. As the taz newspaper reported, two German states have also offered compensation to communities living near windmills, either in the form of shares in the company, or in the case of Brandenburg, €10,000 per windmill to all communities within three kilometers (1.86 miles).

Meanwhile, the debate is threatening to open up a new flashpoint in Merkel's coalition government. In response to the ongoing court cases, the government recently introduced a measure stipulating that wind farms had to be built at least 1,000 meters from residential estates. These were defined as five or more homes — a stipulation that Miersch and the SPD would like to lift. The Green party, meanwhile, considers the restriction as unacceptable.

Russian hydropower company RusHydro has launched a wind power plant in Russia’s Arctic region. It's far from a signal that fossil-fuel-hungry Russia is going green, but it's a start. (25.04.2019)

Germany's Bundesrat has approved the government's climate package after it was amended by a mediation committee. Parts of the original package had been blocked over cost-sharing concerns. (20.12.2019)