Berlin is in discussion with Turkey to ensure that the German military can fly its sorties supporting the US' anti-IS campaign in the Middle East. But some German lawmakers are threatening to end the mission. 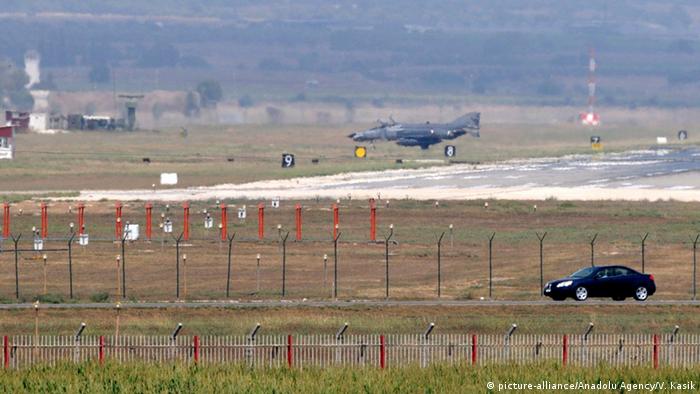 "I expect that missions of the anti-IS coalition will continue to be able to be flown from Incirlik," German Chancellor Angela Merkel told reporters during a visit to Prague. "Part of that, given that we have a parliamentary army, is that German lawmakers be allowed to visit Incirlik if they want to," she added.

The German military, or the Bundeswehr, was expected to continue the mission from the NATO air base in Incirlik provided German lawmakers authorized these missions, the chancellor said.

The controversy around the issue emerged in June this year when the Bundestag passed a resolution branding the 1915 massacre of Armenians by Ottoman forces a genocide. Consequently, Turkey banned German leaders from visiting the air base and could continue to ban another planned visit in October.

Meanwhile, Social Democrats, (SPD) Merkel's partners in the ruling coalition, said they would demand the withdrawal of German soldiers and equipment from Incirlik if Turkey refused to allow parliamentarians to visit again in October. "We will only send our soldiers to countries where we can be certain that we can visit them," the SPD's defense spokesman Rainer Arnold told journalists.

However, Germany's Defense Minister Ursula von der Leyen said both Turkey and Germany could profit from the air base at Incirlik. When asked if the military was prepared for a rapid withdrawal, she said, "Smart military planning always looks at fallback options."

A spokesman for the defense ministry also confirmed to the "Spiegel" that the government was looking at six other options to relocate the 250 German soldiers, six Tornado airplanes and a refueling plane. But such a move would interrupt the flights for at least two months, the "Spiegel" magazine reported on Thursday.

Bundeswehr deployment outside Germany requires a mandate from the parliament. The current mandate for Incirlik runs out in December.

US: Turkey's Incirlik air base used to fight 'IS' is sealed off, power cut

The US consulate in Turkey says the Incirlik air base has been placed in lockdown. The base is used by the US-led coalition, including Germany, to launch airstrikes against "Islamic State." (16.07.2016)