Diplomatic efforts to mediate between Libya's two governments have so far been unsuccessful. Germany wants to convince rival administrations to participate in an international conference to end the power struggle. 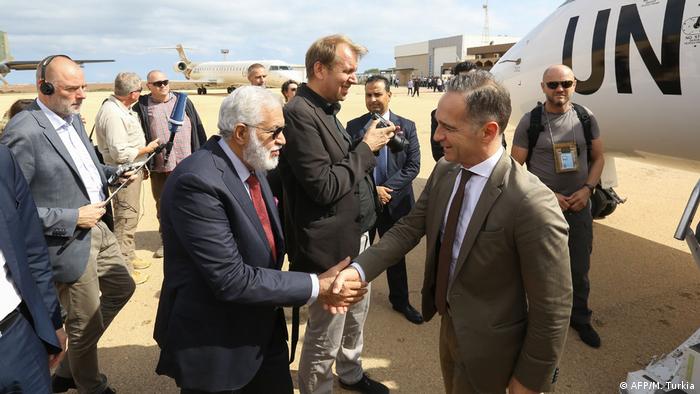 German Foreign Minister Heiko Maas, who arrived in Zuwara on an unannounced visit on Sunday, was set to hold talks with Fayez Serraj, the head of Libya's UN-backed government.

The German foreign minister's visit was not announced in advance for security reasons, according to German officials.

Libya has two rival administrations: the Tripoli-based Government of National Accord (GNA) headed by Serraj, and the other allied with the Libyan National Army's (LNA) Khalifa Haftar, which has a stronghold in the eastern city of Tobruk.

Libya has fallen into chaos since a 2011 uprising that toppled and killed long-ruling dictator Moammar Gadhafi. A number of armed groups are now vying for control of the country or various regions of it.

Fighting in Tripoli has been fierce since Haftar's LNA launched an offensive in April to capture the capital from the internationally recognized GNA.

The World Health Organization says that at least 1,000 people have died in the fighting between the GNA and the LNA forces since April.

International efforts to mediate between Serraj's GNA and Haftar's LNA have failed to yield a positive result.

In July, the UN Security Council called for both sides to de-escalate violence  and return to the negotiating table.

Berlin wants the two administrations to agree to a ceasefire and take part in an international conference to negotiate a settlement. Three preparatory meetings for the summit have already taken place.

In September, German Chancellor Angela Merkel warned that the Libyan civil war could spiral into a bigger conflict like the one in Syria.

Libya is an important transit country for migrants who want to reach Europe. According to estimates by the International Organization for Migration (IOM), Libya currently hosts between 700,000 and 1 million refugees.

In addition, more than 300,000 Libyans have been displaced as a result of fighting in the country.