Widespread discontent over planned labor market and welfare reforms is benefiting German far-right political parties. There are concerns that extremists could win seats in state parliaments in two elections on Sept. 19. 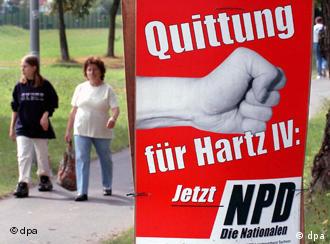 Most of the demonstrators who have been rallying every Monday for the past month against the government's planned reforms would describe themselves as being on the left of the political spectrum. Indeed, the mass protests have enabled the political successors of the East German communists, the far-left Party of Democratic Socialism (PDS), to end their recent exile in the political wilderness and, according to polls, even charge ahead of mainstream parties in some areas. 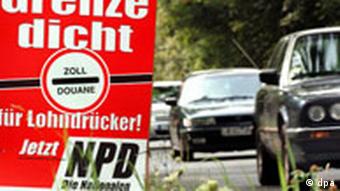 This NPD signs says Germany's borders should be closed.

But it's not just the left wing that is benefiting from the disgruntlement that many -- especially in eastern Germany --feel at the planned changes to the welfare system. A look at some of the angry signs carried at the protests or mounted along roads reveals Germany's far-right is also enjoying a boon from tapping into people's frustration and fear.

"The far-right has been helped immensely by hitching itself to the anti-Hartz IV campaign," Werner Patzelt, professor of comparative government at the Dresden Technical University, told DW-WORLD, referring to the name of the proposed reforms. "While there is no organizational cooperation between the far-right and far-left, the right-wing extremists have been able to capitalize on the same issues that the left has."

Experts warn that in elections in the eastern states of Brandenburg and Saxony scheduled for Sept. 19, the far-right could poll above the five percent mark, thereby winning seats in the state parliaments there.

A survey carried out on Sunday by the Infratest polling group showed that in Saxony the National Party (NPD), Germany's oldest far-right party and considered by many to be its most dangerous, could get up to seven percent of the vote. Another survey carried out by the Forsa organization, however, showed the NPD getting no more than four percent.

The surveys showed that those likely to vote for the far-right were primarily younger people, generally working class or unemployed, who do not have a university education.

"It's generally people from the lower social groups, who have a lot of fear about their future," Patzelt said.

The reforms, introduced by Chancellor Gerhard Schröder's government, aim to stabilize Germany's overburdened social security system and boost the country's economy. They would cut benefits to many long-term unemployed, which officials hope would encourage them to find jobs. But among those in eastern Germany especially -- where the unemployment rate hovers at around 20 percent in many areas -- the reforms are perceived as unfair. Many say they would gladly work, if the jobs were there.

"People see that even after the reforms take effect, there is little chance of their finding jobs, and it's made them enraged," Hajo Funke, a professor of political science at Berlin's Free University, said. "That rage is being misused by the right." 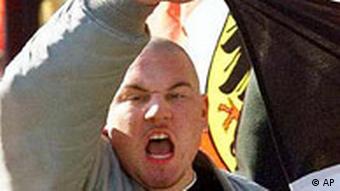 Skinhead at an NPD demonstration.

Part of the recent success of the far-right can be traced to some clever image polishing. While traditionally seen by many as an unruly group of violent skinheads, the NPD and other groups have tempered their image as of late, taming down some of their more extreme views and recasting themselves as "social-revolutionary nationalists" on the side of the little guy.

"Their public manner has changed," said political scientist Patzelt. "They now present themselves as civilized and professional and try to hide the ugly side. But it's deceptive."

He said the NPD and another prominent right-wing party, the German People's Union (DVU), have not changed their basic beliefs, which include anti-Semitic and racist views. The DVU has called for "criminal foreigners" to be expelled. Its posters demanded "German jobs for Germans first." Both are strongly against Turkey possibly joining the EU.

The NPD's candidate in Saxony, Holger Apfel, has even called for Germany to reclaim lands lost after 1945 which now belong to Poland and Russia.

"Nothing and nobody will keep us from our struggle for the Reich," he was quoted by the newsmagazine Der Spiegel.

Unlike in some other European countries, Germany's far-right movement has never been able to get a strong foothold in the country or unify itself under a single leader. Although they have made it into regional assemblies in the past, their tenures there have usually been short due to infighting and incompetence.

This time, however, the NPD and DVU agreed on a new strategy in which the NPD has limited its campaign to Saxony, where it is strongest, and skipped the state of Brandenburg, where the DVU will be the only far-right party on the ticket. This way, they hope to avoid splitting the vote on Sept. 19.

No repeat of Weimar

While the two recent polls have been contradictory regarding whether the far-right will pass the five percent hurdle and make it into state government after the upcoming elections, political scientist Patzelt said he wouldn't be surprised if Saxony's legislature had to make room for several right-wing lawmakers.

"The potential in Saxony for right-wing voting is around 13 or 14 percent," he said. "You have to consider the 'lying factor,'" where people are reluctant to tell pollsters their true voting intentions. He pointed to the case of 1998 elections in Saxony-Anhalt, where three percent of those polled before the vote said they would cast ballots for the DVU. On election night, results showed that the party had actually garnered 12.9 percent of the vote. 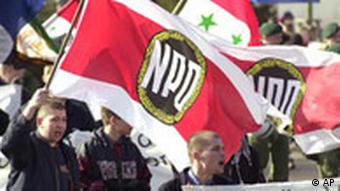 But most experts say although the current rise of the far-right is worrying, it does not represent a fundamental threat to German democracy.

"It's not dangerous in the sense that we're seeing a repeat of the Weimar Republic," said the Free University's Funke, referring to the German government in the 1920s and early 1930s which fell to the Nazis. "But in some local regions, we could see a change in the political atmosphere and a weakening of democratic values."

Voter support for the successor to the former communist party of East Germany is reaching record highs as the party supports protests against the government's welfare reforms. (Aug. 18, 2004)

More marches against the Hartz IV welfare reforms took place on Monday. Again the focus was on the east of Germany where anger is growing and discontent over conditions in the former communist states is rife. (Aug. 31, 2004)

Germany's Social Democrats suffered their worst defeat in over 40 years in the state elections in Saarland on Sunday, as voters vented their anger over Chancellor Gerhard Schröder's welfare reforms. (Sept. 6, 2004)