More marches against the Hartz IV welfare reforms took place on Monday. Again the focus was on the east of Germany where anger is growing and discontent over conditions in the former communist states is rife. 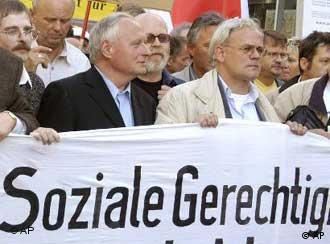 The protests against the German government's planned welfare cuts entered their fifth week on Monday as tens of thousands of Germans once again took to the streets of cities across the country to demonstrate.

But while Chancellor Gerhard Schröder attempted to appease the nation by reiterating his message that the "Hartz IV" reforms would go through for the benefit of Germany, a number of politicians and media warned of growing divisions related to the expected effects of the welfare cuts between the former communist eastern Germany and the more prosperous west.

The proposed cuts to unemployment benefit, a tactic that the chancellor assures will keep the welfare system affordable for an ageing population, are likely to hit the eastern states of Germany hardest where unemployment rates are running at nearly 20 percent, twice the level in the more affluent west. Most demonstrations have taken place in eastern cities, with the most vociferous protests once again happening in Berlin, Leipzig and Magdeburg.

Even former Finance Minister Oskar Lafontaine, a long-time political sparring partner of Schröder, experienced the growing distaste for anything and anybody attached to the ruling Social Democratic Party (SPD) and was welcomed with whistles and even an egg from a roughly 20,000-strong crowd in Leipzig.

Despite coming to the platform with an anti-reform message, Lafontaine, who is a member of the SDP with strong links to the left, found less support than expected in the crowd. He called for "an alternative policy of reform" and for a "growth program so that jobs can be created" but the presence of a man rumored to be preparing to form a new political party with other disenchanted SPD members divided as much as united the protestors. 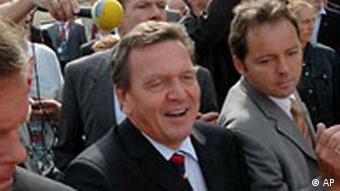 Eggs and abuse came Schröder's way during last week's visit to the east.

It is a sign of the massive task the SPD has to placate the disenchanted people of the east. Schröder has struggled to get his message across in the region and has faced angry and potentially volatile protests with eggs and abuse hurled at the chancellor's direction only last week as he visited Leipzig and Wittenberg.

West is more supportive of reforms

Figures from the Federal Statistics Office show that the chancellor's proposed reforms are creating a distinctive east/west division in opinion, with more westerners than easterners supporting "Hartz IV," which will cut benefit for many long-term unemployed and set tougher conditions on claimants, introducing stricter means testing to encourage jobless people to take work of any kind.

It appears that in the east, where the former communist regime guaranteed a job for almost everybody, the idea of welfare cuts have released bottled-up frustration that after more than a decade of reunification, many feel worse off than before.

Just 39 percent of east Germans happy with Schröder's brand of democratic leadership, compared with 63 percent in the west. Many in the east have begun to fear they will slide into poverty when the benefit cuts take effect in January and that communist rule now doesn't seem so bad. 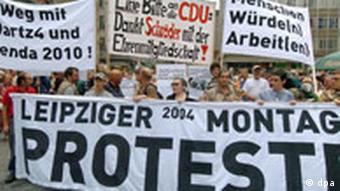 "This creeping sense of unease in the eastern states has not really been registered either in the media or by political representatives," Franz Walter, a political researcher at Göttingen University, told the Bremen regional newspaper Kurier am Sonntag: "So these radical and uncontrolled protests were only a matter of time."

The people of the east will get a different opportunity to voice their protests on Sept. 19 when they go to the polls in regional elections in the eastern states of Saxony and Brandenburg. The ruling Social Democrats (SDP) are expected to lose ground heavily to the Party of Democratic Socialism (PDS), the successor to the former East German communist party. Schröder has accused PDS officials of hijacking the reform debate.

The chancellor's not for turning

But the chancellor, well aware of the damage a pounding in the state elections would do to the SDP's credibility nationwide, remains unrepentant. The reforms, he repeats, will not be watered down and discussing the reforms is not a sign that his resolve is weakening.

"Showing sensitivity and trying to relieve people's fears...does not mean changing, it means explaining why what we are doing is necessary," he said before a party meeting.

Before the elections take place, more demonstrations are expected. While the actual numbers of protestors are reported to be less each week, the organizers of the marches have said that the protests for the fifth "Monday Demonstration" had spread to 202 cities, up from 140 a week ago. A spokesman for the Berlin protesters claimed that more than 200,000 joined the nationwide marches on Monday and added that a national demonstration in the capital has been organized for Oct. 2.

The wave of protests against the German government's proposed welfare and job market reforms took a nasty turn on Tuesday as Chancellor Gerhard Schröder ran the gauntlet of public unrest in the east of the country. (August 25, 2004)

Chancellor Schröder said he feared growing opposition against his social reforms could damage unity between eastern and western Germany as protest organizers gear up for another round of weekly Monday demonstrations. (August 29, 2004)