An expert commission has recommended pushing back Germany's planned nuclear phase-out by at least eight years, according to a news report published on Tuesday. The goal is to reduce expensive energy imports. 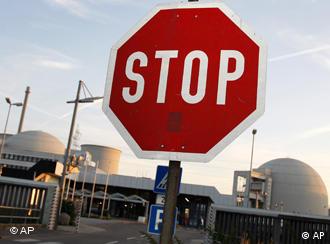 Experts say the phase-out should be slowed down, if not stopped

A German plan to extending the use of the country's nuclear power plants beyond the set phase-out period in 2020 is more concrete than expected, Der Tagesspiegel newspaper reported Tuesday, Aug. 5. 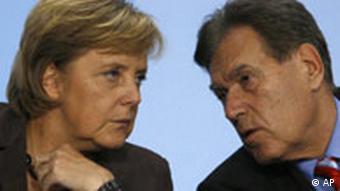 Will Merkel, left, and Glos, sign off on the paper?

German Economics Minister Michael Glos recently set up an expert group called the Political Energy Program, or Pepp, consisting of top scientists and economy ministry officials. The committee has come out in favor of an “atomic energy use law,” which has a complete framework and is set to be reviewed by the chancellery this fall.

“Turning back from the plan to phase out nuclear energy makes ecological and economic sense, and we recommend it,” the scientist group wrote in the paper, according to Tagesspiegel.

The paper recommends extending the planned use of German atomic plants by eight years, from a current 32 years up to “at least 40 years.” If not, in 10 years Germans will need to generate twice as much energy from expensive gas as they do today, the experts warned.

This would create “many billions of euros” in extra costs for consumers, given the soaring prices of natural gas, the paper said. To avoid this, a decision must be made "as quickly as possible -- at latest, at the beginning of the next legislative period," to revoke the existing nuclear phase-out law,” the Pepp authors wrote.

Under the previous red-green government, Germany passed a law requiring a total decommissioning of nuclear power plants by 2021.

To relieve pressure on consumers in the short term, the paper recommends political support for cheaper energy, using a calculation based on atomic energy prices. This would have a “social component,” the authors wrote, and would also help publicize the cost advantages of nuclear energy. 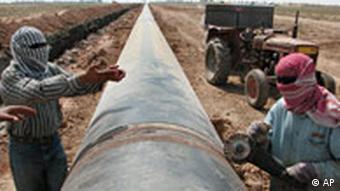 This, in turn, would help make public discourse on nuclear energy “more objective,” according to Pepp.

Shortly before the summer legislative recess, the German cabinet assigned Glos to examine the effect of the global energy crisis on the German economy, and to present solutions for an efficient, secure and cost-effective energy policy. As part of that effort Glos formed the Pepp group. According to Tagesspiegel, Glos has yet to officially sign off on the paper.

In the paper, Pepp suggested that any profits the nuclear plants make by staying open longer should be set aside in a foundation, and be used to invest in energy efficiency, energy research and renewable energies.

The foundations shouldn't be mandated by legislation, but should take place in “a framework of voluntary agreements.” They also said it is crucial to investigate possible terminal storage areas for atomic waste, with the “aim of finding a solution.”

German Environment Minister Sigmar Gabriel has taken a sideswipe at France for exporting nuclear technology. French President Nicolas Sarkozy has placed the French nuclear industry at the heart of his foreign policy. (21.01.2008)