German Environment Minister Sigmar Gabriel has taken a sideswipe at France for exporting nuclear technology. French President Nicolas Sarkozy has placed the French nuclear industry at the heart of his foreign policy. 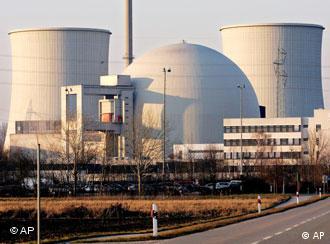 Gabriel said in an interview with the German newspaper Nordwest Zeitung that he was uncomfortable with plans to construct atomic plants in countries "that are hardly reputed to be repositories of stable democracy."

"Anyone who praises nuclear energy as a panacea to energy policy issues should not be surprised if there is a growing danger of the proliferation of atomic weapons," Gabriel told the paper on Monday, Jan. 21.

The minister, a member of the Social Democratic Party, said the example of Iran showed that it was not such a big step from civilian use of nuclear energy to the development of atomic bombs. 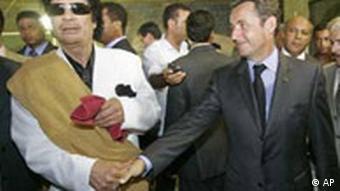 Sarkozy's fostering of ties with Gadhafi have raised a few eyebrows

At the end of last year Aveva clinched a commercial nuclear power contract worth a record 8 billion euros ($11.6 million) to supply China with two reactors and provide nuclear fuel for nearly two decades. EDF is also expected to have a stake in the Chinese plant.

Gabriel rejected German exports of nuclear plants. He said it was not against the law, but was in political contradiction with Germany's current law phases out nuclear energy.

"The last reactors will be taken of the power grid by 2020," Gabriel said.

If Germany can prove that fighting climate change doesn't necessarily require nuclear power, other nations will follow. But if Germany fails, a nuclear renaissance may result, says DW's Jens Thurau. (16.01.2008)

Britain's decision to back a new generation of nuclear power plants has been welcomed by Germany's nuclear industry, which says the German government would do well to reconsider its commitment to a nuclear phase-out. (11.01.2008)

What do you think about France's policy? Send us an e-mail. Please include your name and country in your reply.