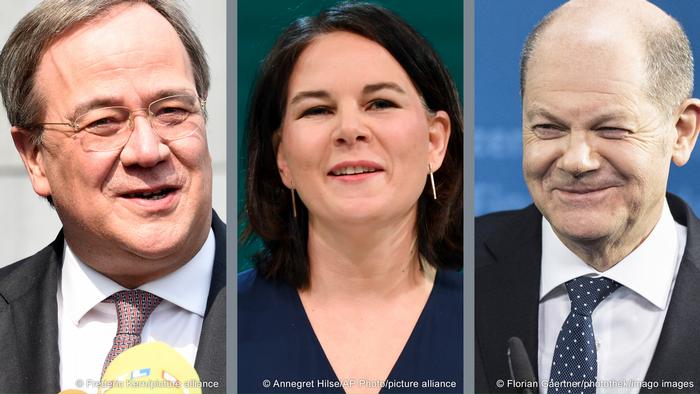 The three candidates for German chancellor, Annalena Baerbock of the Greens, Armin Laschet of the Christian Democratic Union (CDU) and Olaf Scholz of the Social Democrats (SPD) took part in a debate on Saturday.

The event, titled "Beyond Westlessness: Germany's Role in the World," came three months ahead of Germany's federal elections on September 26. 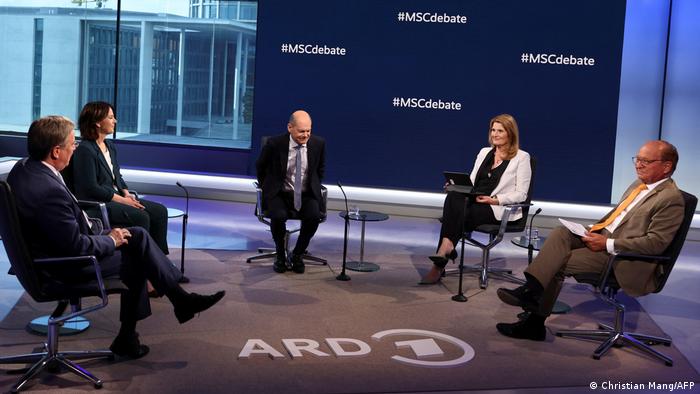 The debate focused on the candidates' visions for Germany's future foreign and security policy. It was moderated by the Munich Security Conference chairman, Ambassador Wolfgang Ischinger, and Tina Hassel, the head of the capital studio of public broadcaster ARD.

What topics came up?

The three candidates were asked about a range of issues, including the trans-Atlantic relationship, climate change and Middle East security policy, as well as Germany's role in the EU and relations with Russia and China.

With Baerbock of the Greens and the CDU's Laschet representing opposing views on the debate stage — the upstart idealist seeking to shake things up in a values-based manner, and the more conservative realist emphasizing business and existing interests first — it was Scholz who worked to thread the needle between the divergent visions.

In response to a question posed by current MEP and former Polish Foreign Minister Radek Sikorski about the outcome of the Nord Stream 2 pipeline, Laschet and Scholz threatened to halt the transfer of gas through the pipeline if Russia breaks its commitments to Ukraine.

"Should [Russian President Vladimir] Putin not abide by this rule and use it against Ukraine, it can also be stopped at any time," Laschet said. "It's that simple."

Ischinger read out a menacing statement aimed at Ukraine that Putin had delivered at the St. Petersburg Economic Forum earlier this month. In it, the Russian president said Ukraine would have to show good will if it wants to remain a transit country for Russian gas in the long term.

Scholz said that while Germany's interest in the pipeline was purely economic, this was clearly not the case for Russia.

Baerbock repeated her demand that the pipeline be scrapped, accusing Putin of wanting to use the project to destabilize Ukraine. She also questioned whether it was possible to cut off European gas from Russia in two places at once as a practical matter should Russia not honor its commitments.

"We cannot just say this is an economic project," Baerbock added. "I went to Russia and talked to key actors, it was said openly the goal was about Ukraine and to circumvent sanctions."

The Greens candidate also spoke of cutting EU funds to Hungary for its continued authoritarian trajectory, something Laschet and Scholz both objected to.

As expected, CDU candidate Armin Laschet spoke favorably of many of Germany's existing policies when it came to matters like Russia and China, where he said trade must be balanced with values.

He was hopeful that dialogue could be sustained even with tough adversaries while protests could be made about certain behaviors that ran contrary to human rights. In contrast to Baerbock, he insisted that dealing with Hungary's slide towards authoritarianism be confined to the European Court of Justice.

SPD candidate Scholz made the most of the continued sparring between Baerbock and Laschet, which grew contentious at times, by drawing on his wide experience as Vice-Chancellor and Finance Minister.

For instance in the Hungarian case, he returned to a familiar refrain of empowering local actors who side with European values, such as Budapest mayor Gergely Karacsony.

Towards the end of the debate, the moderators highlighted a German public opinion survey showing the top three security concerns of the public were all tied to climate change, an issue Green candidate Baerbock is known for championing.

"All we can say is the citizens show good judgement here," Scholz said.

At the debate's conclusion, when the candidates were asked to speak of what they admired in the other two, both Laschet and Scholz praised Baerbock's pragmatic idealist approach to tackling difficult problems in the world.

Baerbock by contrast praised Scholz for his calm and Laschet for his resilience in the face of headwinds.

Business Beyond: Nord Stream 2 gas pipeline as controversial as ever