German Education an Export Hit in the Arab World | Germany| News and in-depth reporting from Berlin and beyond | DW | 07.12.2005

While Germans continue to bemoan their educational system, German higher education is being successfully exported to the Arab world. 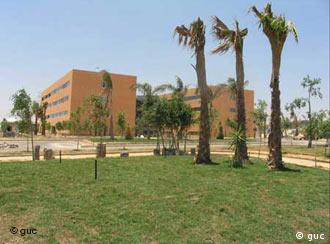 The German University in Cairo, the first cooperation of its kind

In a hilly Syrian village crowned by a medieval crusader castle close to the Lebanese border, about 150 students from the surrounding region study the sciences, business and German -- in a hotel -- until their new university building is finished in two years.

Wadi German Syrian University, which opened in September and hopes to eventually admit 1,500 students, is the third German-style university in three years to have set up shop in the Arab world, with a fourth one in the planning stages. For all the flack German education gets at home from disgruntled students and dissatisifed politicians, it's an export hit in the Arab World.

“The standards of German education are very high,” said Edmond Gebara, chancellor of Wadi German Syrian University, who himself studied in Germany. “And this gives students the opportunity to such an education without having to go abroad.”

Bypassing the French and Americans 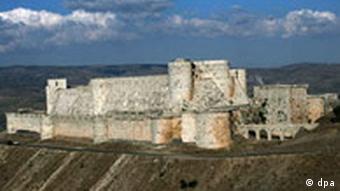 Students study German in the shadows of the Krak de Chevalier

The first collaboration, the German University Cairo, opened in 2003 in cooperation with the University of Ulm and the University of Stuttgart. It offers internationally-recognized degrees in the sciences and in business to the 3,000 students that study there.

This past fall, the German Jordanian University opened its doors to 100 students housed in a temporary location until its facilities can be finished. Officials say they plan to offer 5,000 students from the region a chance to study the humanities, sciences or business in their 5-year programs. The university is supported by the German government and partners with the Magdeburg-Stendal College of the Applied Sciences.

Wadi officials looked at institutions both in France and in the US before deciding that a German one -- the Otto-von-Guericke University in Magdeburg -- was the best model for them. 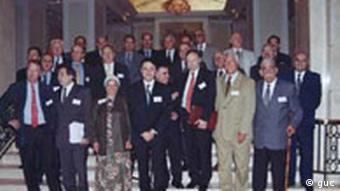 “We had the opportunity and the contacts and that made it come about quickly,” said Gebara. "And the German model means that our degrees will be accepted across Europe."

And even though there has been a tendency for Arab students towards Anglo-Saxon education, Germany is often seen in a very positive light in the Arab world.

“Germany is very highly regarded in education, industry, engineering,” said Nassifa Sabongui, a German University Cairo official. “And this university is attractive to students because it is particularly in the sciences that Egyptian faculties are lacking.” 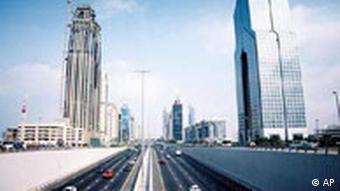 Education officials say it is also important to offer opportunities for young people to stay in their own countries and study instead of going abroad where many often stay.

“Schools like ours are turning out students with a high level of education,” she added. “That means that we then don’t have to bring skilled people from abroad and can keep our students at home.”

Unlike most German universities so far, they have decided to charge tuition fees. It costs about 4,000 euros to study there. That is true of the Cairo school as well -- tuition is as much as 3,500 euros with a reduction for good grades. All schools offer scholarships.

And all three universities teach English and German while courses are in English. But German Jordanian officials say they plan to also offer courses in German after students become more proficient. Professors at all schools hail from English-speaking countries such as the US and Canada, Germany and Arab nations.

Germany's increased educational presence serves a political goal as well. After the September 11 attacks, German officials wanted to increase contact with Arab nations and improve ties, particularly through young people: 60 percent of the population in the Arab world is between the ages of 15 and 30.

“We wanted to get into the region and improve cultural and economic ties,” said Birgit Ammann, project coordinator for the German Jordanian University. “And we heard that there was a tendency on the part of the Jordanians to expand their ties, for example, towards the Germans and French.”

While German institutions have been gaining a presence in the Mediterranean Arab nations, the Gulf states have been less represented.

Branching into the gulf states

That will likely change in the near future. The Rhine-Westfalian Technical University Aachen are considering opening a university branch in Oman.

“We are in the planning stages and trying to reflect on what makes sense to offer there,” said Heide Naderer, director of the university’s international office. “It is a huge project with a lot of things to consider.”

Besides universities, other initiatives to bring Germany closer to young Arabs are in the works. The Goethe Institute and German Academic Exchange Service (DAAD) also want to expand into the gulf region. For example, next year, the DAAD will open a branch of their office in Abu Dhabi in the United Arab Emirates. Goethe Institute is opening a regional branch in April and will begin to offer German classes.

“The Gulf region has only recently come into focus for Germany very recently,” said German Ambassador Jurgen Stelzer. “Before we were not too politically active but mostly our relationship was one as a supplier of consumer goods. But as we want to make our relationship stronger, that has to also include the softer fields such as cultural and educational exchanges.”

Sponsored by the Goethe Institute, the German rap group Blumentopf has embarked on a five-country tour designed to promote interest in German language and culture in the Middle East. (Nov. 15, 2005)

Foreign university students have long been attracted to Germany as an inexpensive alternative to pricier America and Britain. But a court ruling this week clearing the way for German tuition fees could change that. (Jan. 28, 2005)

In an attempt to make German universities more competitive internationally, Germany's federal and state governments have agreed on a billion-euro investment program. But one state's resistance might jeopardize the plan. (April 7, 2005)