German Defense Minisiter Ursula von der Leyen is due to meet with her Iraqi counterpart to discuss ways to remedy the masses of people fleeing the country. Ahead of her visit, she urged unity within the Iraqi government. 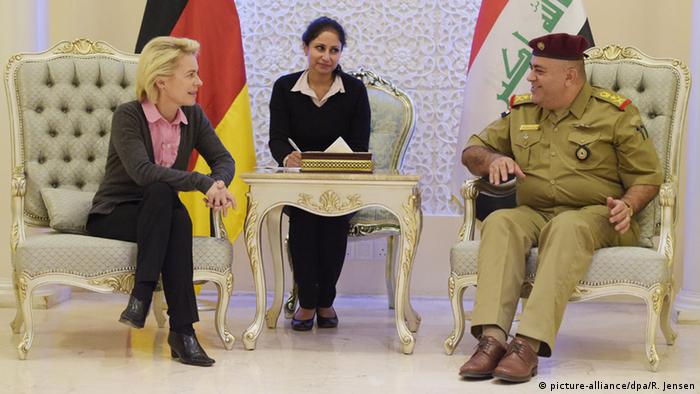 Speaking late on Sunday, von der Leyen said that Germany's strong interest in the region lay not only with the danger of bombers returning to Germany, but that during the visit, she also wanted to "discuss how to alleviate causes of flight from this region."

"We want to show that Germany is a reliable partner in the alliance in the fight against terror," the defense minister added.

More than three million people are currently fleeing Iraq. The number has increased dramatically since the rise of the "Islamic State" (IS) in summer 2014, who has now taken over large swathes of land in both Iraq and Syria.

Following talks in Baghdad, von der Leyen will fly on northwards to Irbil, where around 95 German soldiers are currently training Kurdish Peshmerga fighters to combat IS.

Around 4,700 Peshmerga fighters and Yezidi have undergone training so far, which is organized by the German Bundeswehr in cooperation with Italy, Norway, Finland, Sweden, Hungary, the Netherlands and the UK.

Since 2014, Germany has provided the Kurds with around 1800 tons of weapons and materials, including Milan anti-tank missiles.

The German government has also supported Iraq with more than 130 million euros ($143 million) in aid.

Besides the threat of IS, Iraq also faces the risk of breaking down into Sunni, Shiite and Kurdish regions. Ahead of the meeting, von der Leyen also urged the Iraqi central government to unite, as well as the Kurdish regional government in the north.

"I'm going to Baghdad with the expectation that the unity of the Iraqi central government has held, as this is an important factor in the fight against IS," von der Leyen said ahead of the meeting.

"Anything else would play into the hands of IS," she warned.

What happens to refugees who seek asylum in the Middle East?

Europe is struggling to find a solution to deal with the unprecedented numbers of refugees entering the continent. However, many refugees and asylum seekers wish to remain in the Middle East - or have no other choice. (26.10.2015)

Kurdish Peshmerga are being trained in Germany, honing their weapons and tactical skills. The battle against Islamic State militants in Iraq is a matter of life and death. Wolfgang Dick reports from Hammelburg. (12.03.2015)