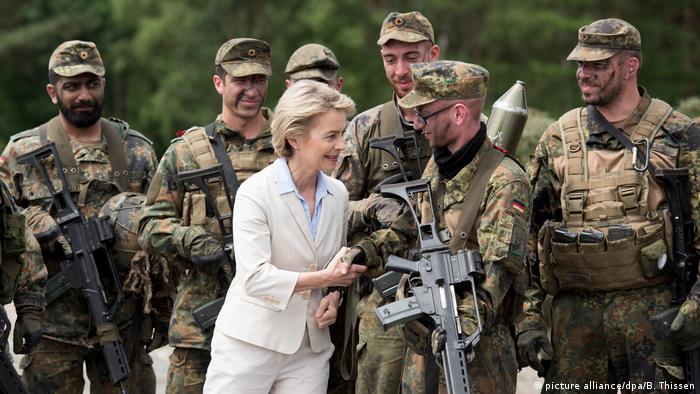 With a looming Brexit and US pressure to boost defense spending, the EU has created a fund to bolster defense cooperation in the bloc. EU officials said it marks a new chapter in bringing member states closer together. (07.06.2017)

German Defense Minister Ursula von der Leyen has apologized to top brass for her remarks about "weak leadership" in the military. But she warned there may be more revelations to come. (05.05.2017)

The German army has been rocked by widening revelations about far-right sympathizers in its ranks and a lingering devotion to the Nazi-era Wehrmacht. So how does the Bundeswehr deal with its history? (16.05.2017)

Von der Leyen told Germany's Funke newspaper concern that "we Europeans must get a firmer grip on our own security" in the wake of Britain's "Brexit" referendum and the US election of President Donald Trump.

Her remarks to the Ruhr District multimedia outlet based in Essen coincided with a public "open barrack" day at 16 Bundeswehr facilities as Germany's armed forces seek to recover from several scandals.

She added that more modern equipment was "urgently" needed in greater quantity for deployments abroad in the face of terrorism.

Earlier, she had told the Funke group that the Bundeswehr's presence in Afghanistan - begun in 2001 but currently reduced to 940 troops in training and advisory roles - would probably continue for years.

"The Bundeswehr has been stationed for almost 20 years in Kosovo alone," she said, adding that another focus of French-German cooperation based on an EU defense fund could be "efforts to stabilize the Sahel region."

The new defense fund - launched last Wednesday by the European Commission and priced initially at 500 million euros ($560 million) from 2019 - aims to boost synergies in the bloc and avoid duplication of military tasks.

According to Left party co-leader Bernd Riexinger, other German political parties - four months out from a general election - must acknowledge that multinational combat missions in which Germany was involved had failed.

"We have for 15 years run a war against terror in Afghanistan, and terror is greater there today. This whole foreign mission has failed completely. Many people have died," Riexinger said told public Deutschlandfunk radio early Saturday.

German Chancellor Angela Merkel, who's currently visiting Central America, released a video message saying that, after decades of budget cuts, the Bundeswehr needed to increase its attractiveness for new recruits in areas such as cyber-security.

European defense cooperation would be closely coordinated with the NATO alliance, she stressed, noting that Europe had a keen interest in stabilizing Africa, a major route for refugees heading to Europe, mainly via Italy.

"As Europeans, we want a coordinated approach," Merkel said on Saturday.