German Defense Minister Ursula von der Leyen has apologized to top brass for her remarks about "weak leadership" in the military. But she warned there may be more revelations to come. 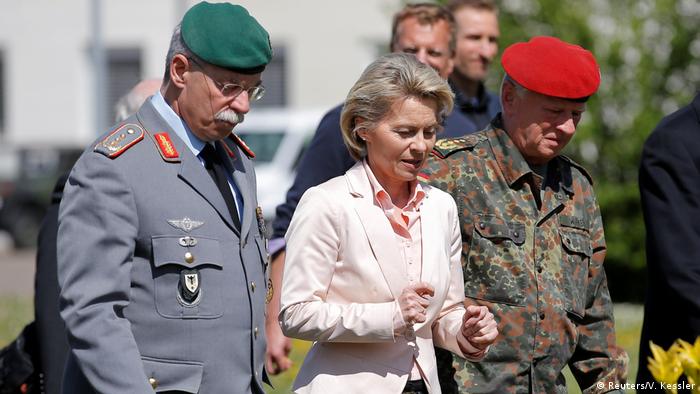 An alleged far-right terror plot continues to rock the German military and pile pressure on the defense minister. Some are asking whether officials looked the other way when confronted with evidence of extremist views. (04.05.2017)

Germany's defense minister has sharply criticized army leadership over the handling of a series of scandals. Her comments have not gone over well with the army support organization. (01.05.2017)

Germany's defense minister has sought to reassert her leadership after criticism over her recent comments on the Bundeswehr. She will travel with top army brass to a base where a scandal was uncovered this week. (03.05.2017)

Thousands of refugee cases are to be scrutinized as a result of the Franco A. scandal. The German soldier managed to register as a Syrian refugee, allegedly with plans of carrying out terror attacks. (05.05.2017)

Defense Minister Ursula von der Leyen had met with around 100 generals and civilian army leaders in an attempt to smooth out the widely publicized row triggered by her criticism of the Bundeswehr.

Von der Leyen praised German soldiers, according to a report in "Der Spiegel" magazine published on Friday, saying that the troops "provide an indispensable service to our country."

Germany's defense forces are reeling from a series of scandals, the latest being the arrest of Lieutenant Franco A., who allegedly posed as a Syrian refugee and planned a terror strike that would be blamed on immigrants.

In a television interview on Friday evening, von der Leyen warned that there may be other, similar incidents in the Bundeswehr which could come to light: "We must be prepared for this," she said. "It is my serious conviction that what we know so far is not everything but that there will be more."

"That is bitter for us, and all of us in the Bundeswehr," von der Leyen said on ARD's "Tagesthemen."

Von der Leyen said it was unclear if Franco A. had actually planned attacks. "We do not know yet," she said. "But it can not be ruled out." The CDU minister said the issues had to be investigated by the Federal Prosecutor. The question of the possibility of right-wing networks among troops was also still open, she said.

Other issues concerning the Bundeswehr include reports of sexual harassment of female recruits, degrading training methods, and some 280 suspected cases of right-wing extremism.

Several days ago, the minister told the German public broadcaster ZDF that the army had "an attitude problem" and was suffering from "weak leadership on multiple levels." The interview caused outrage among soldiers' representatives, who slammed her remarks as sweeping and "massively damaging" to some 250,000 people in active duty. Others questioned why the 58-year-old minister, who has headed the army since 2013, did not sort out leadership problems after taking office.

Meeting the top brass on Thursday, von der Leyen said she regretted her remarks and stressed that soldiers deserved recognition and gratitude. She said she should have made her thanks to the military clear before giving a five-minute interview on right-wing extremism, "Der Speigel" quoted her as saying.

"It took a long time, it fermented, some have ducked away [from issues], glossed over them and trivialized them," she said. "In all of these cases, our mechanisms to prevent offenses and violations against the internal leadership did not go into action."

The minister also said the army was facing multiple challenges, including the so-called "Islamic State" militia, cyberwarfare, the Crimean crisis and extensive reforms in various areas, all of them "costing us a lot of energy and attention."

Von der Leyen said she wished that the military had dealt with "hidden right-wing extremism" earlier in a more systematic manner.