The German military and its troubled traditions | Germany| News and in-depth reporting from Berlin and beyond | DW | 16.05.2017

The German army has been rocked by widening revelations about far-right sympathizers in its ranks and a lingering devotion to the Nazi-era Wehrmacht. So how does the Bundeswehr deal with its history?

The Bundeswehr has taken on a spring cleaning operation. Revelations that two soldiers had been planning a "false flag" terrorist attack in Germany - and to lay the blame on asylum seekers - led to wider questions firstly about the prevalence of neo-Nazis in the German military, and then about the way the Bundeswehr deals with connections to its Nazi-era forerunner: Adolf Hitler's Wehrmacht.

Defense Minister Ursula von der Leyen promised a series of reforms that would both clarify the army's connection with its own history, improve "political education" in its ranks and make it easier for soldiers to report far-right incidents among their peers.

But there are also to be some cosmetic alterations: Bundeswehr Inspector General Volker Wieker, Germany's highest-ranking soldier, ordered a search of all barracks for Wehrmacht helmets, rifles and other memorabilia, and there were also plans to rename a handful of barracks that still bore the names of World-War-II era officers.

A number of commentators have voiced their dissatisfaction about these last measures - especially when the Bundeswehr's Helmut Schmidt University in Hamburg decided to remove a photo of Schmidt, one of Germany's most-fondly remembered chancellors, wearing his Wehrmacht officer's uniform in spring 1940. 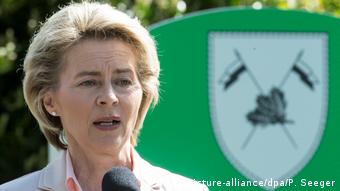 Von der Leyen has ordered reforms to the Bundeswehr

Rainer Arnold, Social Democrat representative on the parliamentary Defense Committee, said the removal of the photo showed that von der Leyen had "lost all sense of proportion." Indeed, the ministry itself said later that the decision "could have been taken differently."

The Bundeswehr and the Wehrmacht

The Bundeswehr's relationship with its ancestor has often been schizophrenic. Von der Leyen recently reiterated the guiding principle - defined in 1982 - that the Wehrmacht must not serve as the "foundation of a tradition" for the Bundeswehr. Yet, the fact that Wehrmacht helmets are still on display in many barracks suggests that soldiers still recognize a shared history with their World War II comrades.

"The spirit of the Wehrmacht still seems to be partially present through symbols and memorabilia," commented Alexander Neu, Left party member of the parliamentary defense committee.

The sensitivity around the issue stretches into the roots of post-war Germany. For the first few years of the new Federal Republic, the Bundestag itself opposed Chancellor Konrad Adenauer's plans to found an army at all, and the parliament only relented because of Adenauer's determination to see West Germany join NATO - which required military commitments.

When the Bundeswehr was finally founded in 1955, however, it was clear that it would have to be manned almost exclusively with former Wehrmacht soldiers. Indeed, two of the Bundeswehr's first leading officers, Hans Speidel and Adolf Heusinger, had been top Wehrmacht generals. (Speidel, who was involved in the 1944 plot to kill Hitler, served as commander-in-chief of NATO's Central European ground forces.) In a famous response to allegations that the officers of the new Bundeswehr were almost exclusively former Wehrmacht men, Adenauer sardonically remarked that NATO wouldn't exactly accept 18-year-old generals. 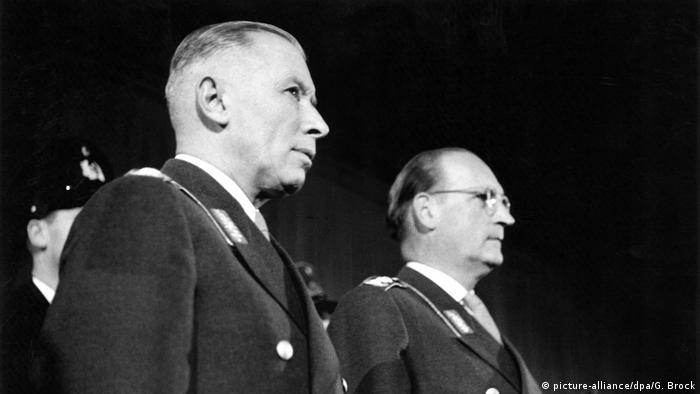 Considerable pains were taken to instill new values in the soldiers. While the 1.3 million men who made up the Wehrmacht had to swear personal obedience to Hitler - the so-called "Führereid" - the Bundeswehr soldier was to be a "citizen in uniform:" he or she pledged their oath to the German constitution, or Basic Law, and was to be guided by a concept know as "Innere Führung," or inner leadership. That meant soldiers had a duty to recognize the limits of obedience, and to refuse "criminal orders." 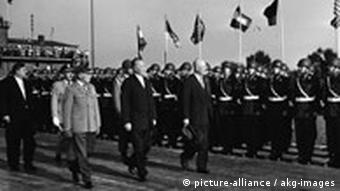 In addition, the Bundeswehr was put under the authority of the Bundestag (which means the parliament must approve any foreign military missions), which instituted a special committee to vet all those applying to be officers in the new army. Those who were thought to have ordered or participated in "criminal" operations in German-occupied territories during World War II were rejected.

From 1955 to 1957, this committee vetted around 600 former Wehrmacht officers, rejecting the applications of 51 applicants, while another 32 withdrew their applications.

The "Traditionserlass" ("tradition decree"), initially drawn up in 1965 and updated in 1982, codified exactly how the Bundeswehr understood its own tradition. Here, the army said that the Wehrmacht was not to be seen as the foundation of the Bundeswehr, and that any Nazis symbols were banned from display - though Wehrmacht memorabilia could be displayed for "research and educational purposes."

However, the decree has been criticized for offering certain "back doors" - for instance the fact that local commanders have the authority to determine how their unit "preserves traditions." As the new round of inspections have shown, some commanders are apparently stricter than others about these rules. That is one of many reasons why von der Leyen has decided to overhaul the tradition decree.